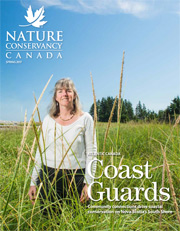 Coming April 17: Stories about small acts of conservation, one family's intergenerational love for nature, what a scout packs in her backpack to go on adventures...and more!

Coast to Coast
Learn about five small acts you can do to help conservation.

Feature
Meet Danielle Robertson whose roots in Nova Scotia's Port Joli run as deep as the rich history there.

Species Profile
Learn about an unassuming species that plays a major role in Canada's coastal ecosystems.

Force for Nature
Long-time NCC supporter and donor, Richard Ivey discusses his and his family's life-long connection with nature.

Close Encounters
The late Stuart McLean, writer and broadcaster and NCC ambassador, pens the story of Eric and Doris, an outdoorsy couple from Edmonton.

The Nature Conservancy of Canada Magazine is distributed to donors and supporters of NCC who contribute more than $25 per year.