www.natureconservancy.ca > Home > Who We Are > Publications > Magazine > Spring 2018

Home on the range 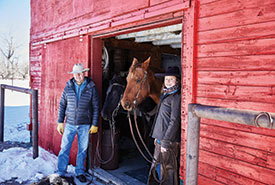 Spanning the lush, vibrant grasslands of Alberta’s southern foothills, the Palmer Ranch is a place deeply rich in history, with family connections to the land tightly intertwined with the practice of ranching. It’s a place where cows graze on grassy ridges neighbouring Canada’s Rocky Mountains, which tower majestically in the background. The area still harbours wildlife species, including large carnivores, that once existed throughout the Northern Great Plains.

In 1999, co-owners Scott and Tom Palmer approached the Nature Conservancy of Canada (NCC) with the idea of building a lasting legacy on this land. It was NCC’s first large conservation agreement on the boundary of Waterton Lakes National Park. The project planted the seed for other collaborations between NCC and ranchers in the area.

Scott’s daughter Julia is keen to continue her family’s legacy by taking reins as the manager of Palmer Ranch. Read our interview with Scott and his eldest daughter, Julia, below.

NCC: Scott, why was it important for you to teach Julia about ranching and the rancher’s life?

SP: She came naturally to it. I wasn’t specifically teaching her things, she was just picking up on it. She had lots of exposure to different ways of approaching ranching, too.

JP: One thing that was really special about growing up with my parents was that I never had to be a rancher. If I wanted to explore something else, I could. I just happened to love ranching, so mom and dad made a point of including me on so many different adventures. I wasn’t always helpful, and in fact may have slowed down the process, but I never felt like I was a hindrance. I had something to offer, and I could be part of the ranch. In ranching, you have this tie to a place that you watch, grow and change with. You can start to see your influence on it and also how it shapes you.

SP: NCC has been really important to us, ranching-wise. It’s given us a really nice base of grass to produce some grass-fed cattle — the way it used to be done [by ranchers in the past].

JP: It’s been really exciting to have an organization like NCC to partner with, and it’s been great tapping into the knowledge network NCC has, such as rangeland health experts in the area. NCC has also been really open to our suggestions too, allowing us to work collaboratively on improving and enhancing this property.

While we’ve absolutely made some mistakes at times, we’re recognizing and making the changes by using new strategies — that’s where NCC has been really important for us. Working with NCC, we’ve been able to develop off-site watering systems and change our grazing patterns by using electric fencing.

NCC: Julia, why is it important to you to continue your family’s legacy on Palmer Ranch?

JP: I love this place. If I could do one thing in my lifetime well, I want to leave it either intact or better than it was before. I want to contribute to a place, a landscape, that has meant more to me than I could ever put into words. “Ranching allows me to live here, and I really hope it is what I’m able to do for the rest of my life. I don’t have a family at the moment — my husband grew up on a sheep farm in Scotland and has a love of farming and agriculture as well — but we’re hoping to have kids. Perhaps they won’t want to be ranchers, but I hope they will always have an appreciation for nature and for the ranch.

To read more about the history of Palmer Ranch and more from Julia and Scott, visit natureconservancy.ca/palmerranch.