www.natureconservancy.ca > Home > Who We Are > Publications > Magazine > Spring 2019

One piece at a time 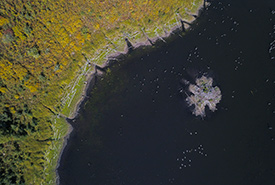 The Beaver Hills area, near Edmonton, provides a blueprint for how privately protected areas can contribute to nature conservation.

Landowner Glen Lawrence remembers a time when, ironically, it was rare to see a beaver in the Beaver Hills area. The area’s namesake, along with many other species, was eradicated due to the fur trade and habitat loss. And while beavers were reintroduced in the 1940s within Elk Island National Park, located within the Beaver Hills area, it took several decades before they were a common sight outside the park.

Today, thanks to decades of efforts by landowners and conservation groups, beavers are back, along with elk, fisher, moose and many others in a network of protected lands in what is today known as the Beaver Hills Biosphere Reserve*. The biosphere designation is based on the region’s important natural and cultural features, and the participation of the local community in protecting and managing the Beaver Hills. In fact in 2010, Lawrence placed his own property under a conservation agreement with the Nature Conservancy of Canada (NCC), to ensure its natural values were protected for the long term. 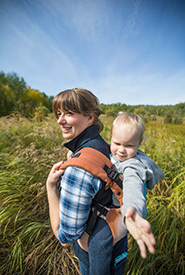 Now, a recognition by Environment and Climate Change Canada of the importance of privately protected areas (PPAs) in the overall conservation matrix signals an important step in formally recognizing the contributions of private landowners and conservation groups in the country.

Conservation partnerships Located just east of Edmonton, the Beaver Hills area has been the focus of both private and public conservation efforts over the years. Government-protected lands in the Beaver Hills date back to when Lawrence’s grandparents were homesteaders in the early 1900s. Elk Park, then a forest reserve (later becoming Elk Island National Park), was created in 1906 to save a remnant herd of elk. And while other nearby areas in Beaver Hills, including Ministik Lake, Miquelon Lake and several natural areas, were conserved by the provincial and federal governments and other groups, these parks were isolated, meaning there would be no guarantee that habitat and wildlife could thrive.

In fact, had they been left on their own, these protected areas alone might not have been enough to conserve a representative sample of habitat that would ensure the long-time survival of an area’s plants and animals. But in the case of Beaver Hills, privately protected areas — lands owned by NGOs, corporations, individuals or groups and other entities — have helped create a protected area network far stronger and healthier than isolated parks in the area could accomplish. It’s one example of how PPAs are an important conservation tool. 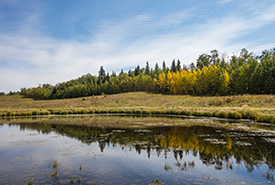 The 159-500-hectare (394,133-acre) Beaver Hills Biosphere Reserve, with its more than 5,000 hectare (more than 12,400 acres) of PPAs, now supports hundreds of species. And it’s not just wildlife that this area supports. Communities benefit from the wetlands and other habitats that help clean and store water. The area’s trees help improve air quality.

PPAs have been a part of the world’s conservation landscape for centuries. But Canada is just starting to explore how PPAs can be more formally recognized and how they will help the country reach its global biodiversity targets. Canada has established Target 1, which outlines its goals to protect 17 per cent of its land and 10 per cent of its marine habitats by 2020. To meet that goal, Environment and Climate Change Canada now acknowledges the contributions of PPAs to its tallies of conservation lands. It’s an exciting prospect, says NCC’s vice-president, conservation policy and planning, Lisa McLaughlin, as PPAs have long played an important role in Canadian conservation.

*An internationally recognized UNESCO designation that recognizes an area that balances conservation with sustainable use.

This is an excerpt of a story that first appeared in the spring 2019 issue of the Nature Conservancy of Canada Magazine. Donors who contribute at least $25 or more per year will receive four issues of the magazine. Click here to donate today and start receiving the magazine.