www.natureconservancy.ca > Home > Who We Are > Publications > Magazine > Spring 2019 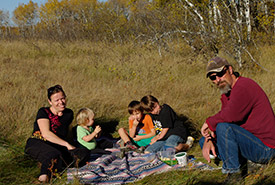 By Lucy Weston, freelance writer and photographer. Lucy and her husband, Scott, are the former owners of NCC’s Dundurn property in Saskatchewan.

To tell our story, you have to go back to November 1999 when I met Scott Lawrence, my future life partner, on an idyllic beach on the Baja California Peninsula, Mexico.

Scott and I shared many conversations; a particularly memorable one was about our hopes and dreams for the future. I explained to him that I was a photographer and that I was about to do my bachelor’s degree in photography. His response was that he wanted to buy some land in a place called Saskatchewan, build an eco-house and live self-sufficiently.

I emigrated to Canada from the U.K. in 2005, excited to get started on our plan to buy land and live self-sufficiently in Saskatchewan. When Scott found the tiny advertisement in The Western Producer, we were immediately excited about this piece of land for sale near Dundurn on the edge of the Moose Woods. We arranged to see it that same day and met with Sid Pryor, the landowner, for a personal tour of the property.

Sid was an elderly gentleman and explained that the land had been passed down to him by his father after the war. He let the Hutterites graze their cattle out there, but the soil had never been turned.

At 65 hectares (160 acres), featuring undulating, mixed terrain and ancient grassy sand dunes, it was exactly what we had been looking for — every bit the hidden gem we had hoped it would be.

The local rural municipality stipulated that the road approaching the property had to be widened to 18 metres and resurfaced to suit all weather. We found ourselves stuck in a bureaucratic quagmire with all further plans ground to a halt.

I started asking myself what our priorities were. Firstly, we needed to get the land protected. This land must not be altered, exploited, damaged or harmed in any way. Secondly, we needed people to see this magical place. With a little research, I found the Nature Conservancy of Canada (NCC).

We will continue to be inspired by this wild paradise, and we feel profoundly gratified by sharing and conserving it for everyone to enjoy.