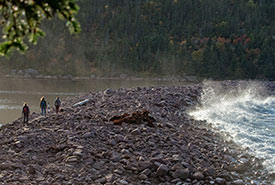 Immerse yourself in the unique coastal environment of the East Coast Trail in Newfoundland and Labrador.

he East Coast Trail is a rugged, 336-kilometre hiking trail. It follows the coastline of Newfoundland’s scenic Avalon Peninsula, from Portugal Cove through St. John’s and south to Cappahayden. Not far from St. John’s, a popular section of the trail passes through the Nature Conservancy of Canada’s (NCC’s) Freshwater Bay Nature Reserve. The East Coast Trail was named one of the best adventure destinations by National Geographic in 2012. It is on the bucket list of many Canadian nature lovers and visitors to Newfoundland.

Started in 1994 by a grassroots organization, the trail now winds through more than 30 communities, many of which offer accommodation for hikers. Also along the trail are wooden platforms for those wishing to camp out. But the East Coast Trail isn’t a walk in the park; the paths cover hilly terrain and often hug steep cliffs that drop seemingly straight down to the Atlantic Ocean. Hikers also need to consider the dynamic weather, which can feature a combination of fog, blazing sun, high winds and ice pellets — even in June! 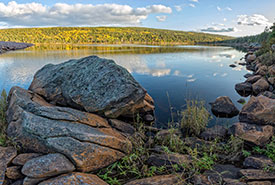 The challenging terrain of the East Coast Trail leads to incredible views. There are also opportunities for encounters with seabirds and other wildlife. The trail takes hikers to iconic landmarks, such as Cape Spear National Historic Site. Depending on the time of year, visitors to the East Coast Trail will be treated to stately parades of icebergs, thrilling pods of whales or feasts of abundant berries. Other attractions include The Spout (a wavepowered geyser), an enormous sea arch and a 50-metre suspension bridge near the abandoned community of La Manche. 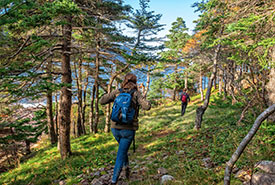 The trail is managed and maintained by the East Coast Trail Association. It passes through a combination of private property and Crown land, with few conserved sites. Two popular destinations have been protected by NCC at Maddox Cove and Freshwater Bay, near St. John’s. The reserve is mainly forested, with black and white spruce, balsam fir and white birch. It features typical native plants of Newfoundland and Labrador, such as northern pitcher plant, lowbush blueberry and common Labrador tea. By conserving this forest, NCC is also helping to buffer colonies of seabirds — black-legged kittiwakes, black guillemots, herring gulls and great black-backed gulls — on nearby islands from disturbance.

This story originally appeared in the Spring 2020 issue of the Nature Conservancy of Canada Magazine. To learn more about how you can receive the magazine, click here.