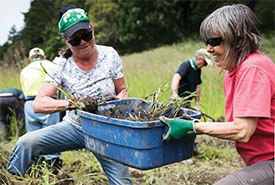 With the dedicated help of Canadians across the country, the science of restoration ecology can help reverse the loss of nature and transform our relationship with the natural world.

Jumping onto the blade of her spade with grim determination, Carly Dietrich sinks into the soggy ground and triumphantly lifts a clod of heavy black earth held together by reed canarygrass roots.

“I need to put my full body weight on my shovel, because I don’t weigh very much,” says Dietrich. She throws the dirt to one side for washing, so volunteers can stack roots from the invasive plants in a pile to be disposed.
Dietrich, who is taking environmental studies at the University of Victoria, was one of 19 volunteers from Green Teams of Canada who spent an early Sunday digging and sloshing around in mud to clear reed canarygrass from the Nature Conservancy of Canada’s (NCC’s) Chase Woods Nature Preserve on Vancouver Island.

“This helps me get to know the landscape and the invasive species,” says Dietrich, who recently moved to Vancouver Island from Edmonton.

The aim is to restore more than two hectares (five acres) that were originally intertidal marsh lands connected to the Cowichan River Estuary. For the last century, the wetlands have been drained and used as a hay field.
Cheers erupt from the increasingly sweaty volunteers as small pools of water appear in areas previously covered by sod, the seeping moisture offering instant proof that the project is succeeding. The open water will provide habitat for waterfowl, fishes and native estuary plants.

“I love doing conservation work because I feel like every little bit counts,” says volunteer Morgan Mills of Brentwood Bay, a community close to Victoria. “It’s a good way to spend a Sunday because I like to do things that
really matter,” she adds.

The restored wetland is part of a 40-hectare (99-acre) nature preserve, which includes mature coastal Douglas-fir forests on the slopes of Mount Tzouhalem in the Cowichan Valley. NCC acquired it in 2009 from David Chase. Serious wetland restoration work started here in 2018.

This is an excerpt of a story that first appeared in the spring 2020 issue of the Nature Conservancy of Canada Magazine. Donors who contribute at least $25 or more per year will receive four issues of the magazine. Click here to donate today and start receiving the magazine.