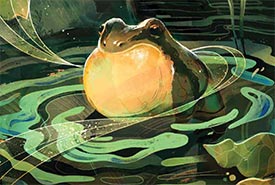 We often think that there is the city, and that beyond it lies true nature. I was born in Gatineau, Quebec, where I would head to the big parks on the city’s outskirts if I felt the need to spend time in nature. I joined the Nature Conservancy of Canada (NCC) in the fall of 2019 as the Ottawa Valley project coordinator. While working on an invasive species inventory in some of Gatineau’s wetlands this fall, I happened upon an area of rich urban nature struggling to survive.

In Gatineau’s marshes and ponds lives a species assessed as threatened in Canada: western chorus frog - Great Lakes - St. Lawrence - Canadian Shield population. This frog is so small and hard to find that to count the number of individuals in a population, we need to measure the intensity of its call (louder choruses equal more frogs). Some spring evenings, up to 10 individuals can produce an almost deafening sound, heard almost 100 metres away. These days, however, the species is having a tough time. Not only are its habitats disappearing at an alarming rate, but its remaining habitats are often overrun by invasive species.

Many of the areas that I inventoried last fall were completely taken over by invasive common and glossy buckthorn. This species emits toxins that are harmful to amphibian embryos. But the western chorus frog is hardier than I had expected. As I stood in a thicket of buckthorn, I was surprised to hear the call of a few. There were only two or three individuals, but to me their song was as piercing as ever. I realized that there are species living in the heart of Gatineau doing their best to survive, even if they are heard and not seen.

But the western chorus frog may not be able to withstand the destruction and invasion of its habitat for much longer. As I wandered through the wetlands on that fall day, listening to their song, I wondered for how long we might hear them in Gatineau. In Quebec, the western chorus frog is no longer heard except for in Outaouais and Montérégie. For me, there’s no doubt about it: we must protect and restore these last habitable areas for this species, even if they are small, isolated and invaded.

This story originally appeared in the Spring 2020 issue of the Nature Conservancy of Canada Magazine. To learn more about how you can receive the magazine, click here.