Speaking for the Earth 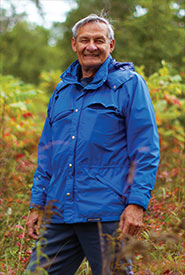 As a biologist, Indigenous person and artist, Rick Beaver weaves together Traditional Ecological Knowledge and science for the benefit of the planet.

As much as Rick Beaver is a biologist, he’s also a detective. His intense curiosity and inherent connection to the natural world have led him to some of Canada’s most interesting and unique landscapes. From the rocky Pacific shores along the coast of Vancouver Island, to the Prairies, he has worked and lived in the wild places that define this country — and has the T-shirt to prove it.

“I spent one of the coldest winters ever recorded in Saskatoon. They gave everyone in the town who survived through the season a ceremonial shirt,” he recalls, laughing.

Ultimately, his journey led him full-circle back to the place where he was born: Alderville First Nation, north of Cobourg, Ontario. As a member of Michi Saagiig, Beaver’s Indigenous culture is tied into his work as a biologist and conservationist. This double-knot joins together
his education and childhood with a nomadic father, whose work as an electrical engineer brought Beaver and his family all over Canada.

“It was wonderful to experience as many expressions of the land and waters as possible,” he recalls. “I was also exposed to many different social and cultural experiences in my own work in environmental science. Of particular interest to me is the approach of Indigenous Peoples when it comes to environmental issues.”

Beaver’s approach to how to protect the land is deeply rooted in how conservationists see the bigger picture of conservation in Canada. “Both western and Traditional Indigenous Knowledge are necessary things in protecting the land. While western knowledge focuses on statistics and proving and disproving hypotheses, in Indigenous knowledge, the outcome focuses on survival,” he says. “It’s essential in getting the big picture of an area. Without Traditional Indigenous Knowledge, it is impossible to piece together the history of the land.”

This way of looking at the land has been applied to great success in the Nature Conservancy of Canada’s (NCC’s) work with Indigenous communities to conserve the Rice Lake Plains. Upon returning to Ontario in 1992 and until his retirement in 2015, Beaver worked with NCC and the Rice Lake Plains Joint Initiative, now called the Rice Lake Plains Partnership, to protect the prairie and savannah here. “The subtleties and nuances in this part of the world are fascinating, particularly the drought, heat, fire, and the rare and endangered species found here,” he says. Val Deziel, NCC’s coordinator, conservation biology in the Rice Lake Plains, says Beaver’s experience and knowledge of this area have helped deepen NCC’s understanding of this complex ecosystem, leading to better conservation of the land and water here.

“I often consult with Rick regarding restoration, describe what we’re doing and why, and he is always very supportive,” she says. “Rick encourages me to keep going when times are tough. Restoration in this area is no easy feat; we have a long agricultural legacy to overcome on these tiny remnants.”

Mark Stabb, NCC’s program director for central Ontario-east, echoes Deziel’s sentiments. “Rick has been a community leader and mentor to so many, including NCC staff, over the years,” says Stabb. “He has seamlessly meshed Traditional Ecological Knowledge with his significant training in science. He is also very generous and has shared so much with so many. Generations of researchers and field staff have learned from his actions and his results. He lives and breathes the savannah, and his work has been an inspiration to us at NCC.”
Now retired, Beaver is using his art to expose the truth about landscapes and the current plight of climate change.

“Art always carries with it an overt or implied perspective from the artist. My art speaks for the Earth. I really feel like any energy contained in the work I do is from my connections and feelings about these places. As a biologist, Indigenous person and artist, I feel that we need to put some heart into the effort of protecting the Earth.”

Beaver continues to look for stories hidden beneath the surface of Canada’s lands and waters. “One thing I’m always curious about is the awareness of wherever I go. There are great mysteries to be revealed in the land when you’re observant and patient. These are teachings I have taken with me throughout my career and in my art."

This story originally appeared in the spring 2021 issue of the Nature Conservancy of Canada Magazine. To learn more about how you can receive the magazine, click here.