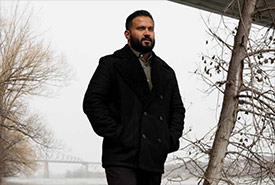 Dax Dasilva, founder of e-commerce platform Lightspeed, is inspiring others to make a difference for nature.

Five minutes from Dax Dasilva’s office in Quebec flows a natural treasure that nurtures life as big as humpbacks and as small as tiny krill. It’s also a major throughway for wildlife and humans that, perhaps, not enough people have appreciation for: the St. Lawrence River.

“Nature is a big part of my life. It always reminds me of how precious and vulnerable it is to humanity’s never-ending expansion,” says Dax Dasilva, founder of e-commerce platform Lightspeed and the non-profit environmental alliance Age of Union. He attributes his deep connection to nature to his upbringing on the West Coast, where he had access to beautiful landscapes. But no matter where he has travelled and settled, hiking and adventuring have always been a part of his lifestyle.

“Given my early exposure to nature, I felt that when I had the resources and platform, I would be doing as much as I could to further conservation,” says Dasilva. “I think people look to tech leaders and how they approach challenges like humanity’s impact on the future. For me, there’s no more important way [to be a leader] than by protecting our planet and its species.”

This vision for safeguarding nature motivated Dasilva to form Age of Union, a non-profit alliance that supports those working to protect our planet’s threatened species and ecosystems. He is now on a path to support tangible conservation projects in his province and around the world through contributions from like-minded business leaders and conservation organizations.

The St. Lawrence River is one of the world’s largest freshwater reserves. It flows into the St. Lawrence Estuary where fresh water and salt water meet, eventually emptying into the Gulf of St. Lawrence, which opens to the Atlantic Ocean. Its entire length (1,197 kilometres) teems with life that remains productive all year long. Dasilva saw this majestic river up close during site visits with the Nature Conservancy of Canada’s (NCC’s) Joël Bonin, associate regional vice president in Quebec.

“Just an hour away from Montreal, you have the floodplains of the St. Lawrence, which look like the Florida Everglades. When we documented all the wildlife close to where [people] live, it is incredibly humbling. Seeing this first-hand motivates you to do everything you can to safeguard life here,” explains Dasilva.

As Bonin and Dasilva threaded a boat through the small channels of the St. Lawrence River delta on a recent visit, they observed the interconnected life along its shorelines, islands and wetlands. Fish here rely on river bottoms for spawning. These areas can be at risk from deforested floodplains, whose exposed soil can get dragged into the freshwater ecosystem during natural cycles of flooding. The health of the wetlands along the river is also vital to maintaining nature’s filtration system, sustaining both humans and wildlife.

Protecting these waters and lands requires a collective effort, or union, as Dasilva calls it. This is where Age of Union can contribute to NCC’s work in protecting these habitats, by supporting restoration activities, cleaning shorelines, reforesting flood plains and more.

With support from the alliance, NCC has helped protect more than 205 hectares, restored over 15 hectares, completed planting over 1,700 plants and helped recover 32 species at risk. This included restoration work on the sandbars of Barachois-de-Malbaie, where vegetation was planted to reduce natural erosion and restore degraded areas. Phragmites control is also well underway at Île aux Grues, approximately 80 kilometres from Quebec City, with a plan to halt this invasive reed’s spread on the island.

The alliance’s funding also contributed to the protection of over 200 hectares at the western end of the Montreal Green Belt, with 1.6 kilometres of shoreline on Rivierè du Nord: habitat for at-risk northern map turtles (one of 17 at-risk species protected through this new acquisition).

“It’s time to shift from going about your day-to-day life on autopilot to a mindset that centres around sharing the planet. We have to think about ourselves as guardians instead of consumers,” reflects Dasilva.

When asked about his thoughts on inspiring others, Dasilva says: “Doom and gloom is not going to motivate people. If we see positive examples that we can relate to, where we’re moving the needle, we will feel the goal is within reach. We can make impacts every day. Everyone has a unique ability to do something positive for nature — we can be changemakers.”

This power of union — with people, and with nature — is what will motivate positive change in an age of climate emergency. Business leaders like Dasilva are hoping that by showcasing action-oriented causes and their impacts, sharing people’s stories and leveraging partnerships, more changemakers will start their own small actions for nature. “I’m hoping others will find projects they feel close to and follow our example,” Dasilva says confidently.

This story originally appeared in the spring 2022 issue of the Nature Conservancy of Canada Magazine. To learn more about how you can receive the magazine, click here.