www.natureconservancy.ca > Home > Who We Are > Publications > Magazine > Summer 2020 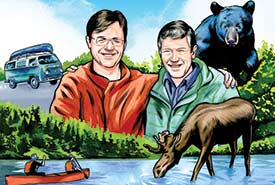 By the Hon. Jonathan Wilkinson, Minister of Environment and Climate Change Canada

Whenever I need to decompress, my mind turns to the boreal forest of northern Saskatchewan. It’s a place where I spent a lot of time from an early age, where we spent our summers canoeing as a family, and later my parents bought a small fishing and canoeing outfitting business in northern Saskatchewan. Each summer our family would put a couple of canoes on the top of a Volkswagen van and we would drive up into the northern reaches of the province. Once there, we would throw the canoes in a lake and paddle for a week or two.

When I was about 15 or 16, I took a canoe trip with my dad and a few of his friends down the Geikie River, which very few canoeists paddle down each summer. It’s a very remote whitewater river, and it’s a place where you can spend a couple of weeks and not see any other human being. It’s very wild. It is an ecosystem that is still very much like it was 100 years ago; an ecosystem in balance. You see black bears feeding on berries, but when you do, they don’t stick around for very long. You see moose coming down to drink in the river at times. If you’re very lucky, you see boreal caribou. I’ve only actually seen one in all the years I spent in the north.

And of course, if you like to fish, there is an enormous abundance to catch as you come down the river, from Arctic grayling, to pickerel. That trip remains a very vivid memory, and it’s something that I know many are not so fortunate to experience. I still go to northern Saskatchewan every summer, and I started taking my daughters every year from the age of three. About five years ago, we flew up the Churchill River and canoed down for a week with their grandparents. That was something I was anxious to give them as an experience. My parents still live in Saskatchewan. Although public authorities have discouraged non-essential travel for the time being, I’m looking forward to the time when I can safely get back to the north.

This story originally appeared in the Summer 2020 issue of the Nature Conservancy of Canada Magazine. To learn more about how you can receive the magazine, click here.