www.natureconservancy.ca > Home > Who We Are > Publications > Magazine > Summer 2021 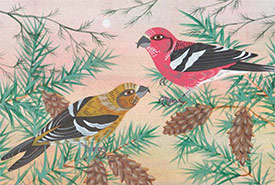 By Matthew Gasner, conservation intern in the Manitoba Region

I heard their “chut-chut...chut-chut-chut” calls somewhere overhead. “White-winged crossbills!” I called out. My family, used to my regular bird identification calls, kept walking without commenting. “Hey, these really are special,” I said, trying to regain their attention. I saw the small flying silhouettes disappear into the top of a nearby pine tree and recognized the opportunity had passed to impress them with another “cool” bird. In a normal year, it’s pretty rare to spot these nomadic finches in most Canadian neighbourhoods.

White-winged crossbills typically breed in coniferous forests, but can be sporadic because their populations follow the ripening conifer cone crop. Crossbills eat the seeds inside the cones, and since conifer trees produce cones in varying numbers from year to year, the birds seem to be in constant motion. I had higher hopes this year, as biologists’ assessments of cone densities in eastern Canada supported forecasts of several finch species moving in large numbers toward central and western Canada. A week or so passed of me hearing them in our neighbourhood, but I only had brief glimpses of them passing overhead. My luck changed when my wife called me into our living room one morning: “Check out these different birds,” she said. Sure enough, there they were! Just two metres from our main window, at eye level, were two females with orangish-yellow tones blended into their streaked heads, backs and chests. Like the bright red male with them, they had black wings highlighted with white patches.

For several minutes, we enjoyed watching these surprisingly small birds uncross their bills (for which they are named) to pry open the scales covering the pine cone seeds. They repeated the task every few seconds in a hurried attempt to consume the few thousand seeds they eat daily. Our luck seemed even greater that day as they returned to the same small spruce tree while my daughters and I played outside. The chattering birds paid little attention to us as we stood just an arm’s length away.

We easily saw how their lower bills crossed to the right under the upper bill. We were close enough to hear the crackling sounds they made as they broke open the cones. I smiled, as it was one of those rare moments where I didn’t need to direct my kids’ attention to what was happening right beside us.

The flock stayed in our neighbourhood throughout most of the winter. Though our travels were restricted due to the pandemic, hearing the crossbills with us on our daily walks provided a sense of connection to all the places they’d been and to where they were headed.

This story originally appeared in the summer 2021 issue of the Nature Conservancy of Canada Magazine. To learn more about how you can receive the magazine, click here.