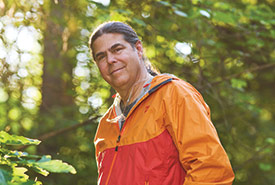 For the first part of his career with Parks Canada, Rob Prosper lived and worked in some of Canada’s most iconic natural areas, such as the Nahanni National Park Reserve. In these places of stunning landforms and beautiful waterways, Prosper also saw first-hand the impression made on visitors by the people who called the land home.

“I used to say, ‘we attract people to geography, but people leave with a cultural experience,’” Prosper explains. “And that’s the one that lasts.”

Prosper recognized that the practices and traditions of Indigenous communities in natural areas, such as the Dehcho First Nation in Nahanni, made profound impressions on visitors. He believes that these types of authentic experiences are important to fostering an ethic of conservation.

Prosper recently retired after a 38-year career and now sits on the board of directors for the Nature Conservancy of Canada (NCC). “It’s an organization that can actually contribute to conservation on the ground and, as a land manager, it lends itself to building relationships with Indigenous people,” explains Prosper about his inspiration to join NCC’s board.

Prosper was the federal lead on the Pathway to Canada Target 1, a goal set by the government to conserve 17 per cent of terrestrial areas and inland water, and 10 per cent of marine and coastal areas of Canada by 2020. Since then, Canada has set the goal of 30 per cent of its lands and oceans by 2030.

When considering reaching these new targets, Prosper believes a wide and inclusive approach is necessary, and sees great potential in working collaboratively with Indigenous communities.

“The biggest conservation gains available to Canada to meet its international obligations,” says Prosper, “are in the area of Indigenous Protected and Conserved Areas, and those can take a whole variety of forms.”

As defined by the 2018 Indigenous Circle of Experts report, Indigenous Protected and Conserved Areas (IPCAs) “are lands and waters where Indigenous governments have the primary role in protecting and conserving ecosystems through Indigenous laws, governance and knowledge systems. Culture and language are the heart and soul of an IPCA.”

Prosper believes these areas can advance conservation and also put in the foreground the importance of Indigenous culture and language. “I don’t know that there is a more profound expression of Reconciliation than Indigenous communities responsible for their territories,” says Prosper. 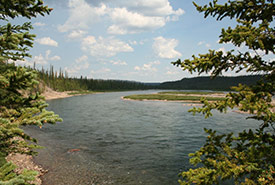 NCC works in collaboration with Indigenous communities across the country on a broad range of conservation projects. Prosper believes the science-based expertise of the organization can be helpful with work, such as identifying biodiversity-rich areas, while Indigenous knowledge and applying concepts such as Two-Eyed Seeing contributes to a holistic approach to managing lands and waters.

Considering his own connections to nature, Prosper thinks about his time working on the land and the relationships he developed. “Experiencing the Nahanni through the eyes of the community of Nahanni Butte and through the eyes of Dehcho First Nation was very influential,” he reflects.

In his work at Parks Canada, Prosper ensured Sable Island, Tallurutiup Imanga and Thaidene Nëné and many other protected areas were established. He lives with his family in southeastern Ontario and has a nearby farm property, which he says allows him to be connected to the land. Prosper plants and tills, while still letting things grow a bit wild to contribute to the area’s biodiversity. He jokes, “I’m now managing my own conservation area."

This story originally appeared in the summer 2022 issue of the Nature Conservancy of Canada Magazine.