Excerpt: A kinship with the land 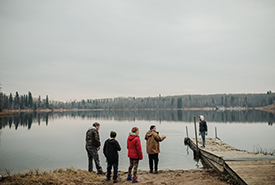 Indigenous Peoples and the Nature Conservancy of Canada are collaborating to conserve lands that weave together Indigenous values, language and culture.

By Michelle Brass, writer and journalist.

It’s a crisp fall day and the view of the Qu’Appelle Valley in southeast Saskatchewan is stunning and serene. This traditional gathering place is the heart of Treaty 4 territory. Treaty 4, signed in 1874 between the Crown and Indigenous Nations, is one of 11 Numbered Treaties that outline the agreement to share the land and live in partnership for “as long as the sun shines, the grass grows and the rivers flow.”

This reference to the land is no accident. For Indigenous Peoples, the land truly is everything. “There’s no way to separate the values, the language, the culture from the land,” says Darryl Chamakese, language facilitator for Treaty 4 Education Alliance, as he gestures toward the rolling hills of the valley. “Even that term ‘land-based,’ I want to refer to it as ‘Mother Earth teachings,’ or ‘Walking Mother Earth,’ to convey that kinship connection we all have toward the Earth.” 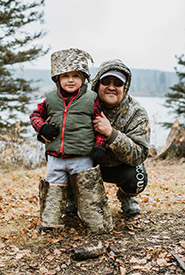 Darryl Chamakese and his son (Photo by Dane Roy)

That connection was disrupted when, after signing treaties, Canada forcibly removed many Indigenous Peoples from their lands. The impacts of these actions on Indigenous communities, and to local ecosystems, were felt across the country. For example, today, after more than a century of agricultural, urban and resource development, only 20 per cent of native prairie habitat remains in Saskatchewan, making conservation efforts vital and urgent.

This urgency to conserve rapidly declining habitats, as well as revive Indigenous languages and cultural teachings that rely on those lands, is one of the reasons the Nature Conservancy of Canada (NCC) reached out to Treaty 4 Education Alliance, says Jennifer McKillop, acting NCC regional vice-president in Saskatchewan.

“It came out of a realization that we are an organization that deals primarily with land conservation, and we had few previous partnerships with Indigenous Peoples in Saskatchewan.

How can you be an organization that focuses on land without working with Indigenous communities, the longtime stewards of the land?”

Offered in partnership by the Treaty 4 Education Alliance and NCC, the Learning the Land project has students learning about natural habitats and species at risk through classroom-based activities, such as research and art-based projects, and outdoor activities, such as medicine walks and visits to culturally significant sites on both reserve lands and NCC properties.

The partnership with NCC was a natural fit for Treaty 4 Education Alliance, as Indigenous educators wanted to get students back on the land to rekindle their cultural connections to it.

“We’ve consistently found that with any land-based learning initiatives we’ve done that the students are hungry for it. They want to see more of it, they enjoy it and they’re getting a lot out of it,” says Scott Fulton, Learning the Land consultant with Treaty 4 Education Alliance. “We’re hoping projects like this will help strengthen land-based learning, native prairie land conservation and language revitalization efforts within the alliance of Treaty 4 schools and communities.”

McKillop is confident that will happen. “The education piece and the relationships that are being developed are what will pay off for everyone in the long run. That’s really what this is about,” adds McKillop.

In Ontario, Esme Batten agrees. She’s spent years developing relationships with members of Chippewas of Nawash Unceded First Nation and Saugeen First Nation, who together form the Saugeen Ojibway Nation (SON). As the coordinator for conservation biology on the Saugeen Bruce Peninsula, she says the relationships, and the partnerships that naturally arise from them, are crucial to her work and the conservation efforts of NCC.

“If we’re not working with Indigenous communities, we’re really missing out on a key part of conservation,” says Batten. “Without the benefit of thousands of years of really valuable knowledge, we’re not going to achieve as much and we’ll use more resources trying to get to where Indigenous Peoples already are.” 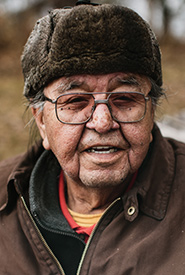 Elders such as Francis Bird are important knowledge-sharers in the T4E program. (Photo by Dane Roy)

NCC and SON are sharing their knowledge and expertise to create an inventory of culturally significant species, medicinal plants, species at risk and invasive species in the area. Incorporating Traditional Knowledge provides a deeper understanding that helps to develop more effective management planning, says Batten.

“We can compare our information to what the Elders say. If they say that a certain species was really common and now we’re only documenting, say, 30 plants in an area, and they remember hundreds, that’s critical information to know what’s actually happening to those species in the territory.”

“It’s an exercise in jurisdictional authority,” he says. “Saugeen Ojibway Nation has the right to have a say and give consent to what’s happening in their territory. Generally this is a challenge for developers and government to understand what that means. An organization like NCC is a little more open to the idea of what that means in translation to what they’re trying to do. Ultimately, we’re both trying to preserve and protect these areas.”

Michelle Brass is a writer and journalist who lives in Saskatchewan. She is of Saulteaux heritage and a member of the Yellow Quill First Nation.