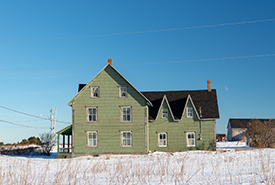 Not only does the area boast beautiful views and an abundance of wildlife, pointe Saint-Pierre also has a rich historical importance. (Photo by Marius Jomphe)

This gem on the Gaspé peninsula offers natural and historic treasures worthy of discovery.

Located between the towns of Gaspé and Percé, pointe Saint-Pierre provides habitat for thousands of seabirds, including harlequin duck and Barrow’s goldeneye. Grey seals and several species of whales can also be seen along its coasts.

Pointe Saint-Pierre boasts meadows, forests and 10-metre-high cliffs along the shores of the Gaspé coast. A continuation of the Appalachian Mountain range, the area features a harsh landscape of exceptional natural diversity and dense stands of Maritime mixed forest. Since 2008, NCC has secured 53 hectares (131 acres) in the pointe Saint-Pierre area.

A legacy to conserve

Not only does the area boast beautiful views and an abundance of wildlife, pointe Saint-Pierre also has a rich historical importance.

With its traditional Loyalist architecture and Victorian touches, the LeGros House is a testimony to the Jerseyan merchants who once lived here.

Jerseyans, inhabitants of the Anglo-Norman island of Jersey, once played an important role in commerce and trade in Gaspésie, and can be traced back to a number of families in the area. Families such as Alexandre, LeMaîstre, Mouilpied, LeMarquand, LeGresley and LeHuguet often travelled to LeGros House between 1880 and 1957. Here they celebrated weddings, births and anniversaries, and also mourned the loss of family members.

Donated to NCC in 2007, this house, with the exceptional condition of its content (including furniture, photos, accessories and attic) seems frozen in time. Visitors can immerse themselves in the everyday life of a Jerseyan family in this era.

There is no shortage of natural wonders to see and explore in the Gaspé. In fact, in 2011 National Geographic magazine named the region one of the top tourism destinations in the world. Pointe Saint-Pierre forms the easternmost point of the Gaspé Peninsula. Immerse yourself in pointe Sainte-Pierre’s beauty as you wander the hiking trail. Interpretive panels provide information on the area.

Pointe Saint-Pierre (between Percé and Gaspé, 975 kilometres northeast of Montreal)