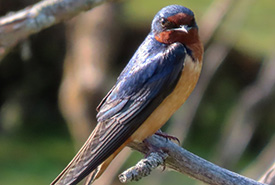 The barn swallow is one of the world’s most widespread birds. Its most interesting feature is its incredibly acrobatic flight, as it swoops and dives after its insect prey over open habitat, including meadows and open water. It can be recognized by its tawny (orange-brown colour) belly, blue upperparts and deeply forked tail. The barn swallow nests in every Canadian province and territory, except Nunavut.

Both male and female barn swallows in North America look alike. Barn swallows are a striking metallic dark blue all along their head, body, wings and forked tail. Their tawny underparts have small flecks of white near the tail. Barn swallows are similar in size to house sparrows, with an average length around 15 to 19 centimetres and a wingspan around 30 centimetres. 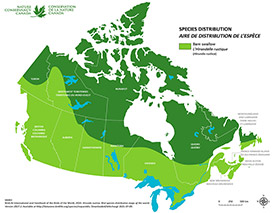 Where does the barn swallow live?

Barn swallows are highly adaptable. They occur in open habitats such as fields, parks, roadway edges, marshes and meadows. Historically, these birds nested in empty caves and cliff ledges, but they now nest almost exclusively on human structures, including under bridges, the eaves of buildings and, of course, barns. Outside of Canada this bird occurs in places such as the United States, central Mexico, Europe and Asia. It is one of the few bird species to reside in every continent (except Antarctica). Birds that nest in Canada migrate to Central America and South America for winter.

What is the barn swallow's conservation status?

Despite these birds being widespread, their overall population has been steadily declining in recent decades. The Committee on the Status of Endangered Wildlife in Canada have assessed barn swallows as special concern. The Canadian population declined rapidly beginning in the 1980s, but now appears to be stable. Key threats include loss of nesting structures, insect declines and climate change.

What is NCC doing to help protect the barn swallow's habitat?

The Nature Conservancy of Canada (NCC) works in all 10 provinces across Canada. In Quebec, NCC has been working to increase the barn swallow population by building nesting boxes on its île du Moine property in Sainte-Anne-de-Sorel, on Lac Saint-Pierre. Nesting boxes allow barn swallows to have a safe place to live away from predators. Outside of Quebec, NCC installed four nesting structures in 2013 for the same purpose. In Ontario, NCC has many large-scale habitat restoration projects, from Pelee Island in Lake Erie, to the Maitland River Valley, the Southern Norfolk Sand Plain, Rice Lake Plains and Minesing Wetlands natural areas. All of these involve planting many native plants in formerly degraded areas, supporting better insect abundance and diversity to feed barn swallows and other wildlife.