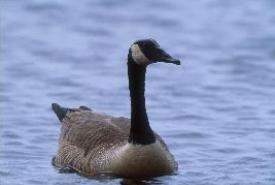 Quite possibly the most familiar bird species to Canadians, Canada geese roam around parks, lakes and wetlands in the spring and summer. But there are many things that you might not know about this iconic bird.

An easily identifiable species, the Canada goose has a large brown body with a tanned underside, a dark, elongated neck and a white chin strap on its head that extends to its cheek.

Surprisingly, Canada goose has an identical-looking cousin — the cackling goose. It is quite difficult to distinguish between the two species. In a flock of geese, you can differentiate Canada goose from cackling goose, as Canada goose is generally larger, and has a more slender neck and elongated bill.

Like many other migratory bird species, Canada geese flocks fly in a “V”-shaped formation.

Where does the Canada goose live?

Canada geese, like other waterfowl, prefer to live near bodies of water so they can safely nest and raise their goslings. However, they prefer grassy fields, particularly lawns, to forage for food and to stay alert for any threats. Human habitats — such as golf courses, parks and suburban areas — provide a good view of predators.

Canada geese can be found throughout Canada and the United States, from the Pacific to the Atlantic coast, during breeding season. Some populations migrate south for the winter, but they will also remain year-round if open water is available. These populations are called migrant and resident geese, respectively.

What does the Canada goose eat?

Canada geese are herbivores, but have a separate diet for the warmer and colder seasons. During spring and summer, they feed on grasses and sedges while berries, seeds, grains are preferred in the winter.

Even though this species is more adapted to man-made areas than other birds and they sometimes eat crops, they should not eat bread, as it leads to malnourishment. If malnourishment is severe, there is potential for them to contract a disease called “angel wing,” which severely impacts their flying abilities, ultimately leading to death.

How does the Canada goose nest?

Although Canada geese pair for life, they are only socially monogamous, meaning one partner may occasionally mate with another individual, but will return to its mate shortly after. They do not produce young until they are around four years old. When nesting in the spring, the female usually waits by her nest — made of dried plant materials and feathers — while the male defends her and their territory.

What is the Canada goose's conservation status?

Although the Committee on the Status of Endangered Wildlife in Canada has not assessed the status of Canada goose, the International Union for Conservation of Nature has deemed it as a species of least concern.

Before the 1960s, Canada geese were not a familiar sight in southern Canada. Over-hunting and the destruction of wetlands all contributed to diminishing populations of migratory Canada geese across North America.

Canadian and U.S. government efforts to increase population numbers in the early and mid-20th century succeeded, but they introduced many resident populations as a consequence. At the time, parks and suburban lawns were also increasing in size, allowing these resident geese populations to flourish in North America.

Currently, there are over 5 million adult Canada geese in North America. In fact, populations are still growing! With our ever-increasing agricultural activity, there is an abundance of food for Canada geese populations to expand in size.

What is NCC doing to help protect the Canada goose's habitat?

The Nature Conservancy of Canada (NCC) has been protecting habitats near bodies of water — especially wetlands — since 1968, and has accumulated around 60,700 hectares (150,000 acres) of wetland for protection. These bodies of water are important nesting sites for Canada goose and other waterfowl.

Areas like Grand Codroy Estuary are recognized as Ramsar sites, which are wetlands of international importance. On World Environment Day 2019, through the Natural Areas Conservation Program (NACP), NCC was able to protect a vital freshwater wetland habitat in PEI to further protect the habitats needed by migratory birds like Canada goose.