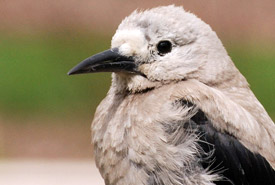 Clark's nutcracker is a bird that leaves a bigger impact on the landscape than its size would suggest. Named after famous explorer William Clark, the bird resembles a magpie, and with good reason. It too is actually a member of the crow family.

Where does the Clark's nutcracker live?

The species is native to British Columbia, Alberta and the western United States. You can find it around the Rocky Mountains, especially near ski resorts and hiking trails where it looks for handouts. Clark's nutcracker may also be found on many Nature Conservancy of Canada (NCC) properties. It contributes to the conservation of two declining native pine species, simply by feeding itself during long winter months.

What does the Clark's nutcracker eat?

Through the summer months, Clark's nutcrackers supplement their diet with insects and berries but, come early fall, they start to collect and store their favourite food: the seeds of limber and whitebark pine. Both species have challenges of their own.

Neither has a "seed wing" to help with distribution of seeds. The heavy limber pine seeds fall straight to the ground under the tree, while whitebark seeds are trapped in the cone, until Clark's nutcracker breaks them free with its beak.

Then the hard work really begins. Individuals have been reported to collect as many as 35,000 seeds in a year, carrying them more than 10 kilometres away. The bird then uses its beak to dig shallow holes in the ground, typically hiding four to five seeds, though sometimes as many as 15, in each cache.

Clark's nutcracker will never eat all the seeds. It stores them as an insurance policy against theft by squirrels and other animals. That means only a portion of the seeds are ever recovered and the rest may take root, resulting in new trees.

The relationship between the bird and pine trees is a perfect example of mutualism: a biological interaction between species that results in a mutually advantageous relationship. You could say Clark's nutcracker is "passing on" the conservation impact in its own way.