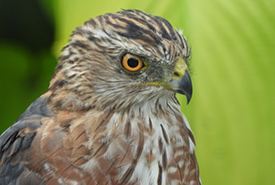 Cooper’s hawk, a species once dwindling in Canada, is now common. You may also recognize Cooper’s hawk by its previous name, chicken-hawk. Historically, many people were not a fan of this bird. However, its reputation has changed and hawks are now recognized as an important part of the ecosystem by controlling the population of rodents, other small mammals and insects.

These birds are aerial foragers. They primarily hunt for other birds, but will also eat small mammals.

Cooper’s hawk is approximately crow-sized and has a wingspan between 60 to 90 centimetres and a long tail. Overall, females are slightly larger than males. When perched, adults display a very straight, upright posture. Feathers are blue-grey along the hawk’s upper parts, but its face is light grey and white. Its beak is short, and its underbelly is white with black speckles throughout. Cooper's hawk has rusty, red eyes, and its sharp talons are yellow. 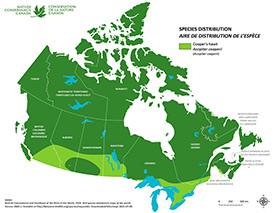 Where does Cooper's hawk live?

Cooper’s hawk is now widespread across much of southern Canada, the majority of the United States and northern Mexico. This woodland bird can be found anywhere from a deep forest to a neighbourhood park.

What is the Cooper's hawk's conservation status?

Currently, Cooper’s hawk is designated as not at risk by the Committee on the Status of Endangered Wildlife in Canada (as of 1996), though the species struggled with declining numbers for decades, partly due to the widespread use of DDT. The pesticide accumulated in the bodies of hawks and other species near the top of the food chain and reduced their chances of reproducing. With DDT banned in North America, wildlife populations slowly began increasing again, including Cooper’s hawk.

What is NCC doing to conserve the Cooper's hawk's habitat?

Cooper’s hawks have been documented on over 50 NCC properties, including BC’s Sage and Sparrow Conservation Area and the Alfred-Kelly Nature Reserve in Quebec. NCC protects habitat for birds across the country through observation centres like the Johnson’s Mills Shorebird Reserve, in New Brunswick.

Help protect its habitat through a Gift of Canadian Nature. Learn more here >