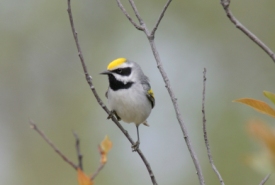 A group of organizations, including Bird Studies Canada, Environment Canada, Parks Canada and the Nature Conservancy of Canada (NCC), is hoping to find out as much as it can about the golden-winged warbler in Manitoba. Members of the Northwest Golden-winged Warbler Working Group are taking a close look at the threatened species. They're studying its population, nest success, habitat preferences, genetics and travel corridor requirements. 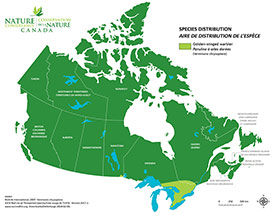 There is therefore a lot of interest in studying the Manitoba population to learn as much as possible about what "pure" golden-wings need to survive. The hope is that this knowledge can be applied to conservation, says Artuso.

"Manitoba may be this species' last chance at survival," says Cary Hamel, conservation science manager in NCC's Manitoba Region. The research and support programs that NCC, the working group and volunteers are conducting will go a long way towards better understanding the golden-winged warbler. Hopefully one day this bright bird will be a common sight once more.