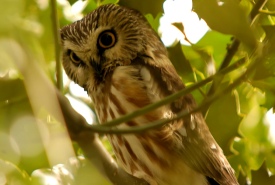 Where is the Haida Gwaii saw-whet owl found?

What does the Haida Gwaii saw-whet owl look like?

The Haida Gwaii saw-whet is a small owl, measuring about 20 centimetres from the top of its head to the tip of its tail. As with most owls, the female is noticeably larger than the male, tipping the scales at 100 grams, while the male weighs approximately 75 grams.

The primary difference between this subspecies and its more common cousin is its darker colour — while the mainland owl is distinguished by its white markings, they are buff-coloured on the Haida Gwaii species of this bird. This owl has yellow eyes, a relatively large head and short tail, giving it a compact appearance.

Like many owls, the Haida Gwaii saw-whet is usually detected by its characteristic calls. In early spring the males give a long, monotonous series of whistled toots, about two per second, that are higher pitched than those heard on the mainland. When agitated, they may also let out cat-like meows and sharper squeals.

What is the Haida Gwaii saw-whet owl's life cycle?

The owl can live between five to seven years and begins breeding after one year of age.

Courtship starts in early March, with male owls calling out to potential mates from the tree tops. Starting in late March or early April, females lay three to seven eggs in a tree cavity — usually one excavated by a woodpecker such as a northern flicker — and incubate them for almost four weeks. Females are the sole protectors of the nest, while the male does all the hunting to feed the female and young. After a month in the nest, the young move through the forest with their father, and by mid-summer are completely independent.

As with most owls, Haida Gwaii saw-whets are predominantly nocturnal. They have very keen ears, which allow them to hunt deer mice and shrews by the sounds they make on the forest floor. In winter, many saw-whets move to the coast of Haida Gwaii to feed on invertebrates in the intertidal zone.

Where does the Haida Gwaii saw-whet owl live?

During breeding season, these owls are found in mature and old-growth forests, often close to wetlands. They nest in cavities in large dead trees found only in older forests. The cavities must be at least 7.5 centimetres in diameter to make a suitable nest for the owl. Older forests are also important because their open structure makes it easier for the owls to catch mice, and they may have higher mouse populations as well.

What threats does the Haida Gwaii saw-whet owl face?

The Haida Gwaii saw-whet owl breeds in mature and old-growth forests, which have significantly declined due to forest harvest. Habitat alterations may also affect the populations of the owl’s prey. The introduction of the Sitka black-tailed deer to Haida Gwaii has resulted in drastic changes to the diversity and structure of the forest understorey.

What is NCC doing to protect the Haida Gwaii saw-whet owl's habitat?

NCC currently owns one property on Haida Gwaii, along the Kumdis River. The property contains extensive floodplain forest, some of which has been logged in the past. NCC plans to let the forest fully recover to a mature forest, which will be ideal habitat for the Haida Gwaii saw-whet owl.