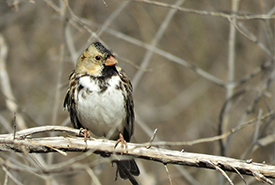 Harris’s sparrow has a pink bill and a distinctive black forehead and bib. It has brown wings with black streaks and white plumage on the underside of its body. This species is the largest sparrow in North America, reaching up to 20 centimetres in length.

Where is the Harris's sparrow found? 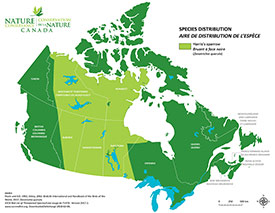 The only songbird that breeds exclusively in Canada, Harris’s sparrow nests in northern Canada and winters in the central U.S. Its range during breeding includes the Northwest Territories, Nunavut, northern Saskatchewan and Manitoba. Breeding habitat for this species is found at the transition between boreal forest and tundra, in areas with stunted conifer trees, thick brush and scattered lakes. As these areas are sparsely populated and challenging to access, the first Harris’s sparrow nest was not documented until 1931, near Churchill, Manitoba.

During migration, this species can be found throughout Saskatchewan, Manitoba, northeastern Alberta and the western edge of Ontario.

What does the Harris's sparrow eat?

During breeding season, Harris’s sparrow has a diet of mainly fruit, such as crowberries, until the snow cover melts. It also eats insects, including beetles, flies and caterpillars, as well as spiders, seeds and spruce needles. In winter, Harris’s sparrow eats mainly seeds and can often be observed at bird feeders.

How does the Harris's sparrow behave?

Nesting on the ground under shrubs or stunted trees, Harris’s sparrow uses twigs, lichen and moss to construct a nest and lays clutches of three to five pale green eggs with reddish-brown spots. The young leave the nest eight to 10 days after hatching.

What is the Harris's sparrow's conservation status?

Harris’s sparrow was designated as special concern by the Committee on the Status of Endangered Wildlife in Canada in 2017.

The population of Harris’s sparrow has experienced declines of approximately 60 per cent in the last 35 years. Threats in its wintering grounds include habitat loss and pesticide exposure. Resource extraction and climate change, including more frequent and extreme fires, may impact its breeding habitat.

What is NCC doing to protect the Harris's sparrow's habitat?