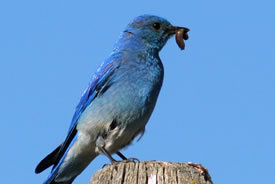 Mountain bluebirds are small members of the thrush family and feature long wings and tails. Males are a striking cerulean to turquoise blue on top with pale blue breasts and white undersides. Their irises and legs are black and their wing tips dusky. Females, on the other hand, have drab, grey-brown bodies with a hint of faded cerulean on their rumps, tails and flight feathers. 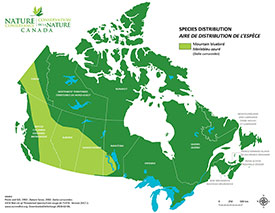 Where is the mountain bluebird found?

These gorgeous birds are found in open areas, such as grassland and pastures, in western North America. In Canada, they range from Manitoba to British Columbia and north to the Yukon. These birds winter in southwestern United States and Mexico. Compared to other bluebird species, they inhabit more open terrain. Mountain bluebirds have adapted to human-altered habitats and will readily nest in bird houses.

What does the mountain bluebird eat?

During breeding season, mountain bluebirds feed on insects, primarily beetles, grasshoppers and caterpillars. While they typically look for food from high perches, they sometimes hover in flight as they search for prey. They also eat small amounts of seeds, particularly in winter, such as sumac and elderberry.

How does the mountain bluebird choose its mate?

When choosing a mate, female mountain bluebirds are more concerned about the location and quality of the nest the male offers than his singing voice, flying ability or looks. The male regularly feeds its mate during the incubation and brooding period.

What is the mountain bluebird's conservation status?

Mountain bluebirds are fairly common and are classified as least concern, according to the International Union for the Conservation of Nature. Despite this, population numbers decreased by approximately 26 per cent between 1966 and 2014. This could be due to a decline in logging and grazing industries in addition to wildfire suppression, which has resulted in fewer open areas — mountain bluebirds’ preferred habitat. Currently, the global breeding population is an estimated 4.6 million, of which 20 per cent breed in Canada. Its population is considered secure in Canada.

What is NCC doing to protect the mountain bluebird's habitat?

NCC is conserving and managing several areas that mountain bluebirds inhabit, such as the Horseshoe Canyon in Alberta. Maintaining open grassland habitats is an important stewardship action for this species.