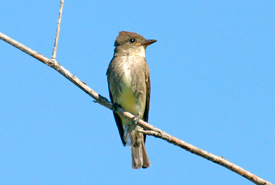 The olive-sided flycatcher is best known for its song: a loud, three-note whistle that sounds like “quick, three beers.” It is often seen perched on top of tall coniferous trees or dead snags, where it patiently waits for flying insects (its prey) to fly by.

Olive-sided flycatchers are relatively large and stocky songbirds, with big heads and short tails. Adults are a deep brownish olive-grey on their sides. The feathers on their throats, the middle of their breasts and bellies are white. 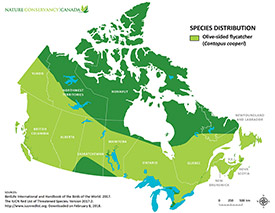 These birds breed throughout most of Canada’s forests and into the western and northeastern United States. In Canada, the population is the densest in southern Yukon and BC. This species winters in Panama and the Andes Mountains, from Venezuela to Peru and Bolivia.

Olive-sided flycatchers are typically found in open areas, such as coniferous or mixed forest clearings. They are also found in forest edges close to rivers, swamps, meadows or logged areas, burned forests and openings with old-growth forest stands.

The International Union for Conservation of Nature ranks the olive-sided flycatcher as near threatened. The Committee on the Status of Endangered Wildlife in Canada has recently assessed it as special concern. According to the North American Breeding Bird Survey, the olive-sided flycatcher population declined by more than 3.3 per cent per year between 1966 and 2014, with an overall decline of 81 per cent over that period. While the cause of this decline is unclear, threats are most likely related to habitat loss, changes in breeding and wintering areas and declining flying insect populations.

The Nature Conservancy of Canada (NCC) protects several properties across the country where olive-sided flycatchers have been seen during the breeding season and migration. These include the Elk Glen property in Manitoba, Meeting Lake 01 property in Saskatchewan, a property in Ham-Sud, Quebec and in Cape Breton’s Marble Mountain, West Lake Ainslie and Ottawa Brook conservation areas.