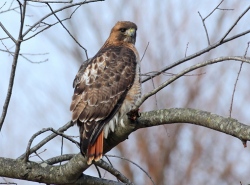 This fearsome bird of prey is the most prevalent North American hawk. You have probably heard its hair-raising, hoarse screech before, as filmmakers often use a recording of its call when hawks or eagles of any species appear in a movie.

Scientists first discovered and studied the red-tailed hawk in Jamaica, which is how it got its species name, Buteo jamaicensis.

All red-tailed hawks have expansive, curved wings with small, broad tails. Most are brown on top with a pale, streaked underside. Adults’ tails are cinnamon-red above and pale below, while young birds’ tails are brown with bands.

Not all members of this species share the same colourations, however. Different morphs exist, namely dark- and rufous-morphs. The former are chocolate-brown with red tails, while the latter have reddish-brown chests with dark undersides. 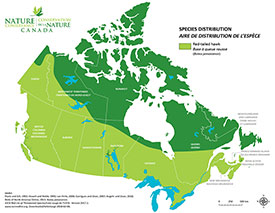 Where does the red-tailed hawk live?

These spectacular birds live in various habitats, ranging from central Alaska south to Venezuela and east to the Virgin Islands. While they prefer open areas, such as fields and deserts, they also live near mountains and in tropical rainforests. They have even adapted to human-inhabited areas and are often seen perched on telephone poles and fence posts.

What is the red-tailed hawk's conservation status?

Fortunately, the red-tailed hawk’s International Union for the Conservation of Nature (IUCN) status is least concern. Many North American populations increased throughout the mid- to late 20th century due to the extensive replacement of grassland and dense forest to open, wooded parkland. Currently, there are over 2 million individuals globally.

What does the red-tailed hawk eat?

These birds of prey have a varied diet, consisting of small to mid-sized mammals, reptiles, amphibians, insects and other birds. They are sit-and-wait predators that perch themselves on high objects and trees in open areas, while scanning the ground for potential prey. When they attack, they dive slowly and carefully, with their legs stretched out so that they can grab prey with their sharp talons.

How does the red-tailed hawk mate?

When about to mate, male and female red-tailed hawks fly in broad circles high in the air. The male then dives down and flies up again several times before reaching the female from above, extending his legs and briefly touching her. Occasionally, the male and female will grasp on to each other, clamp talons and do a spiral plunge to the ground below before unclasping. Mated pairs are usually monogamous until one of the hawks dies.