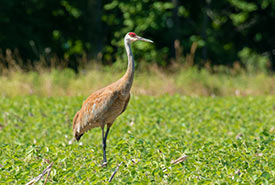 A spectacle for birdwatchers, the annual migration of sandhill cranes is comprised of large flocks, up to thousands of individuals, migrating to staging grounds in southern Canada. Unlike herons, sandhill cranes don’t hunch over open water to hunt, and they stand tall when foraging in prairies, fields and marshes. The sandhill crane now is the most abundant species of cranes in the world.

The sandhill crane is a large bird that can measure up to 1.2 metres tall and have a wingspan of two metres. Adults are mostly slate gray with rusty brown underparts, and they have pale cheeks and red skin on their crown, while juveniles lack the latter two features. The sandhill crane can be distinguished from its endangered cousin, the whooping crane, by colour and size. Whooping cranes are mostly white with a red face and black wing tips when the wings are extended. Whooping cranes stand 1.5 metres tall and have a wingspan of up to 2.3 metres. 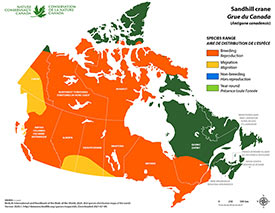 Where does the sandhill crane live?

The sandhill crane is mostly found across much of North America. There are resident and migratory populations, but all sandhill cranes that occur in Canada are migratory. Most of the world’s sandhill crane population breeds in Canada. It nests in open wetlands, such as marshes, bogs and wet meadows.

What is the sandhill crane’s conservation status?

The sandhill crane was designated as not at risk by the Committee on the Status of Endangered Wildlife in Canada in 1979, and its numbers have continued to grow. But it hasn’t always been so. In the past, this species experienced dramatic population declines in North America due to over-hunting, habitat loss and disturbance. But conservation efforts have boosted their numbers steadily since the 1970s. and today they are common.

Despite strong population numbers, this species is vulnerable to habitat changes. Their survival depends on quality wetlands and grasslands for nesting and feeding during migration.

What is NCC doing to help protect the sandhill crane's habitat?

From March to November, sandhill cranes can be spotted across Canada’s grasslands, wetlands and meadows, including on NCC properties from Quebec to British Columbia. For example, Manitoba’s Oak Lake Sandhills and Wetlands Natural Area supports nesting sandhill cranes.

In Alberta, the sandhill crane has been predominately found on properties within the grassland and foothill areas in the south of the province. In Saskatchewan, this species breeds in the West Boreal Transition Natural Area, with possible nesting attempts documented on or near the Nebo property.

In Ontario, sandhill cranes are common and can be found in the Southern Norfolk Sand Plain Natural Area, which is an important wintering and staging area.