Sprague’s pipit is a songbird known for having the longest known flight display of any other bird species. Males often display for about half an hour while airborne, and one was even recorded displaying for three hours. Their display includes flying 50 to 100 metres off the ground, singing a descending series of slurred notes that sound like “zeer,” while gliding, flapping their wings and circling above their territory.

Often mistaken for a sparrow, Sprague’s pipit is a brown-striped medium-sized songbird with white outer tail feathers. Females and males are similar in appearance. 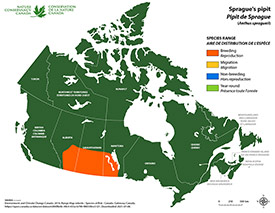 Where is the Sprague's pipit found?

Sprague’s pipit breeds from southern and central Alberta, to southwestern Manitoba and south to southern Montana, northern South Dakota and northwestern Minnesota. It spends the winter in the southwestern United States and northern Mexico.

This species breeds and winters in open grassland with very few to no trees or shrubs. Sprague’s pipits are considered a native grassland specialist and prefers to nest in intact prairies with moderate levels of grazing. The species will sometimes use tame pastures or hayfields, but experiences reduced reproductive success in these areas.

What is the conservation status of the Sprague's pipit?

The Committee on the Status of Endangered Wildlife in Canada has assessed it as threatened. It is protected under the Species at Risk Act federally. According to analyses of North American Breeding Bird Survey data by the Canadian Wildlife Service, the Sprague’s pipit population in Canada declined by four per cent per year between 1970 and 2019, adding up to an overall decline of 87 per cent over that time period.

Threats to Sprague’s pipits include loss and fragmentation of their native prairie habitat, pesticides and climate change. Because this species is so sensitive to habitat changes and requires large blocks of intact native grasslands, they are a useful indicator of prairie health.

What is NCC doing to conserve habitat for the Sprague's pipit?

The Nature Conservancy of Canada (NCC) owns and protects several properties where Sprague’s pipit has been found. In Manitoba, these include Fort Ellice, Maple Lake, which is in the Oak Lake Sandhills and Wetlands Natural Area, and Yellow Quill Prairie Preserve.

In Saskatchewan, Sprague’s pipit has been observed on properties in the Missouri Coteau, Milk River Basin, Upper Qu’Appelle, Saskatoon Prairie and Lower Qu’Appelle-Assiniboine-Quill Lakes natural areas. NCC staff have been monitoring grassland songbirds (including pipits) on Old Man on His Back Prairie and Heritage Conservation Area, Wideview and Hole in the Wall since 2017. Information collected from this ongoing project will allow us to see how and/or if the abundance of these birds changes on these properties over time and will help inform the management of these properties so that it benefits the birds.

In Alberta, Sprague’s pipit has been found on all of NCC’s grassland natural areas, which include properties such as Haugen, Stebanuk and Sandstone Ranch. Most of NCC’s properties are grazed by cattle or bison. Grazing is an important tool for managing vegetation height, and Sprague’s pipit prefers vegetation of an intermediate height and density. Without grazing, vegetation would become too tall and dense, excluding the species from otherwise usable habitat.