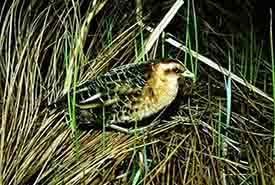 Yellow rail resembles a very young chicken or a quail. Adults have yellow and black streaks on their back, with white wing patches and a brownish-yellow chest and face. This species weighs just 60 grams and measures 15 to 20 centimetres in length.

A small, secretive bird, yellow rail is unlikely to be seen. When startled, it remains in place, preferring camouflage to flight. Its size, limited population and furtive nature contribute to its reputation as a rare bird, making it challenging to study. Its call is a repeating “tic-tic, tic-tic-tic” that can last for many minutes.

What does the yellow rail eat?

Yellow rail feeds on a wide variety of insects, including beetles, spiders and worms, as well as seeds and freshwater snails. The diet and feeding of this species has not been well-documented.

Where does the yellow rail live? 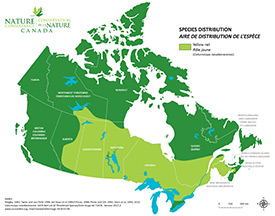 This species depends on marshes with short vegetation for its habitat. A breeding pair build a nest on the ground, which resembles a small cup, and features a canopy made of dead vegetation.

Its breeding range extends across central Canada and northern United States, with much of its population found around southern Hudson Bay. Over 90 per cent of the yellow rail’s breeding range is in Canada.

In September and October, yellow rail migrates to winter along the southern and eastern coast of the United States, returning north in the spring.

What is the yellow rail's conservation status?

The Committee on the Status of Endangered Wildlife in Canada most recently accessed yellow rail in 2009 and confirmed its previous status of special concern. This species has a small population and restricted range in the winter, and the quality of its habitat may be declining in some parts of its range.

What is NCC doing to help protect the yellow rail's habitat?