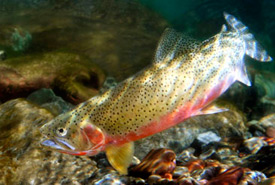 With its streamlined body, the westslope cutthroat trout is best recognized by two bright orange-red slashes beneath its lower jaw. During spawning, the slashes become a distinct bright red on the fish's belly.

The westslope cutthroat trout shares features with other members of the Salmonidae family, such as dark spots on its body, an adipose (fat-storing) fin, small and round smooth-edged scales and a large mouth. This species ranges in colour from silver to yellowish-green. There are three developmental forms of the species: 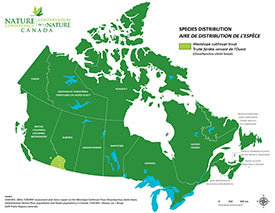 Native to western North America, the westslope cutthroat trout is one of two cutthroat trout sub-species that occur naturally in Canada. This species is found in two distinct populations: one in Alberta and one in British Columbia (Pacific).

Due to its specific habitat needs, this species is often used as an indicator of ecosystem health.

The Committee on the Status of Endangered Wildlife in Canada has listed the Alberta population of this species as threatened. The Pacific population is listed as a species of special concern. The greatest threat facing both populations is rainbow trout, particularly inter-breeding with this non-native species. Westslope cutthroat trout is also susceptible to changes in environment that degrade the species' habitat. Some changes include invasive species competition, forest harvesting, urbanization and habitat fragmentation.

Areas that the Nature Conservancy of Canada (NCC) works to protect and that are native to westslope cutthroat trout include Castle-Crowsnest Watershed, the Bow, Southern Foothills and Waterton natural areas, which are all a part of the Rocky Mountain Front in Alberta.

Other NCC conservation projects that conserve habitat for this species include: