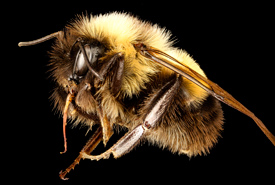 The rusty-patched bumble bee is named for the rust-coloured patch on the stomach of worker and male bees. This species is a medium to large bee, with workers measuring from one to two centimetres long and queens averaging around two centimetres long. Due to their distinctively short tongues, this species “nectar-robs” flowers by piercing a hole at the back of the flower to reach pollen and nectar. It feeds from a wide variety of flowering plants such as milkweed, sunflowers and goldenrod.

The rusty-patched bumble bee was once broadly distributed throughout eastern North America. This species of bumble bee is known as a habitat generalist, and can adapt to a diverse range of environmental conditions. Rusty-patched bumble bees frequent open woods, urban areas, gardens, wetlands and fields but are suffering from the effects of these areas being lost or degraded.

Once widespread and common across North America, this species has endured a rapid decline throughout much of its range. In the past 30 years, this species’ population has declined at least 99 per cent. Since 2002, only a few bees have been sighted in Ontario at Pinery Provincial Park. Although the specific cause of its decline is unknown, scientists believe habitat loss, pesticide use and disease spread from commercial to wild bumble bees is partly to blame.

The rusty-patched bumble bee is facing extinction. It was assessed as critically endangered on the IUCN Red List of Threatened Species. This species is listed as endangered in its native Ontario and Quebec ranges by the Committee on the Status of Endangered Wildlife in Canada and under the federal Species at Risk Act.