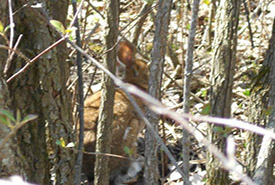 Snowshoe hares are named for their large hind feet, which, like snowshoes, allow them to stay on top of the snow during Canadian winters.

Regardless of the season, however, the edges of the snowshoe hare’s ears remain black.

In summer, snowshoe hares consume a largely plant-based diet. Their diet is dependent on what is available to them in their habitat.

In winter, their herbivore diet changes to twigs, buds, evergreen needles and bark.

Although they are mostly plant eaters, snowshoe hares will consume small mammals, like voles or mice, and carrion.

Snowshoe hares can be found in forests across most of Canada. They are only absent from the Arctic, Vancouver Island and small areas of the prairies and areas of southern Ontario that have low forest cover. Snowshoe hares were introduced on the island of Newfoundland between 1864 and 1876 to provide food and hunting opportunities.

Breeding between snowshoe hares begins with courtship parades in mid-March, and two to four times during the summer. Courtship parades are a 24-hour period, where a female snowshoe hare is receptive to a male and involve both the female hare and male hares travelling together while foraging. During this 24-hour period, the hares break from foraging to chase and jump over each other, with females often breeding with several different male hares.

The first litter of snowshoe hares is typically born in May. Litter sizes change, with the first litter of the season being the smallest (about three to four young) and the second being the largest (average of four to seven young). Females can give birth to up to 13 babies in a litter and can have up to three litters a year.

Unlike rabbits, which are born without fur and blind, baby snowshoe hares are born with their eyes open and fully furred. Although they can live up to six years old in the wild, many hares die before their second summer of life. Snowshoe hares are susceptible to many viral, bacterial and parasitic diseases and predation.

Snowshoe hares are important in maintaining healthy ecosystems within the boreal forest. They are also an integral part of the food chain.

In 2018, the Nature Conservancy of Canada (NCC) participated in the protection of the largest contiguous area of boreal forest in the world. This amazing feat was achieved in partnership with the Tallcree Tribal Government, the governments of Alberta and Canada, and Syncrude Canada Ltd. This collaboration cleared the way for the creation of the new Birch River Wildland Provincial Park. Together with the existing Wood Buffalo National Park, Birch River Wildland Provincial Park forms a 67,735-square-kilometre conserved area in northeastern Alberta.

NCC is helping to protect more than 67,000 square kilometres of boreal forest across Canada, providing habitat for many species of plants and animals, including snowshoe hare.