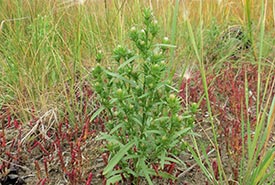 The Gulf of St. Lawrence aster is a fleshy annual plant with clusters of small, white to pinkish flowers. Its stem ranges in length from one to 40 centimetres and may be branched or unbranched depending on the growing conditions. Its leaves are lance-shaped and range from 1.1 to 6.5 centimetres in length and from two to 9.8 millimetres in width. The tip of its leaves is slightly rounded.

Gulf of St. Lawrence aster produces dry fruits, called achenes, with silky tufts, which help the seeds to be dispersed by wind. This plant is also self-fertile and can reproduce on its own without other plants. 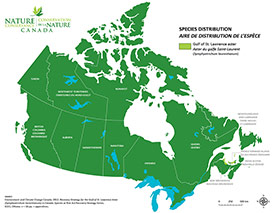 There are only 29 known populations of this species, whose range is limited to Quebec’s Magdalen Islands, New Brunswick and Prince Edward Island.

This species grows on moist sandy soils. It can be found on coastal habitats: beaches, dunes, lagoons and dry areas in salt marshes.

The Gulf of St. Lawrence aster is assessed as threatened by the Committee on the Status of Endangered Wildlife in Canada. Threats to this species include natural disturbances like high tides and floods that can bury the plant in sand. Sea-level rise and an increase in extreme storm events as a result of climate change also threaten many populations. Coastal development can also destroy their habitats.

The Nature Conservancy of Canada (NCC) protects lands on Miscou Island, including sandy beaches that are habitat for Gulf of St. Lawrence aster. On the Magdalen Islands in Quebec, NCC protected Pointe de l’Est where this species is found.