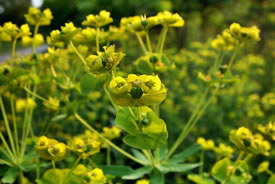 Native to central and southern Europe, leafy spurge is believed to have been transported to North America in the early 19th century, then spread across western Canada. The plant was first recorded in Alberta in 1933 and in Saskatchewan shortly thereafter. By 2005 the Saskatchewan Ministry of Agriculture estimated 8,094 hectares (more than 20,000 acres) in Saskatchewan had been infested with leafy spurge.

Not only does this invasive alien plant expand to overtake nearby areas; the milky liquid from its stems and flowers is an irritant to most livestock and may cause severe skin rashes or irritation in humans. As its greenish-yellow flowers in umbrella clusters dry, they explode and eject seeds up to five metres (six yards), spreading seeds that can remain dormant in soils for up to eight years.

The stems of leafy spurge are arranged in clumps and grow up to one metre tall. The leaves are narrow with smooth edges, and are attached directly to the stem. They are blue-green in colour, but in the late summer they turn yellow or orange-red. The small, yellow flowers lack petals or sepals. They are supported by two leafy bracts.

Leafy spurge is categorized as a noxious weed under The Weed Control Act (The Noxious Weed Act), a provincial law, which states that: "Every owner or occupant of land shall contain and control noxious weeds on his land and prevent the spread of noxious weeds to other lands."

The plant is able to overtake prairie and field vegetation by shading and absorbing available water and nutrients and by releasing toxins that prevent other nearby plant growth. This species can easily overtake large areas of open land.

Controlling leafy spurge takes many forms. Sheep actually enjoy eating young leafy spurge plants, but will only eat this plant when it's tender and young. Goats are also able to graze the plant with little ill effect. Tillage must be initially timed near freeze-up around late October, then frequently repeated through the following year or until the area is seeded to wheat or barley.

Brown or black dot beetles, also known as leafy spurge beetles, are also used to substantially control plant spread. These species of beetles eat only leafy spurge plants. Over time with the depletion of the plant, the beetles either move to other spurge areas or die. The beetles have undergone significant testing to ensure they will not harm other species or the ecosystem, and are ideally suited to control spurge.

Specific herbicides may also be recommended for well-established areas of this noxious weed. Herbicide treatments are most effective if applied in June when flowers and seeds are developing, or in mid-September when these plants move nutrients downward to their roots.

The Nature Conservancy of Canada (NCC) manages leafy spurge and similar noxious weeds or invasive alien species by monitoring and employing one or more of the above techniques through a pest management plan. For instance, on its Big Valley property, located 30 minutes by vehicle northwest of Regina, NCC's Saskatchewan Region has applied both herbicide treatment and biological control (beetles) to contain the spread of the plant. Although there are few occurrences of leafy spurge on most NCC's properties in Saskatchewan, all areas are carefully managed to limit disturbance and decrease spread of the weed.

More information about biological control of leafy spurge is available through the Saskatchewan Ministry of Agriculture or by contacting John Hauer, regional forage Ministry specialist, at 306-463-5506.