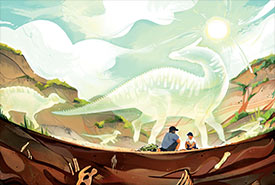 By Wendy Ho, content coordinator at NCC, as told by Dion Hrushkin

It was a hot summer day; the sand and rocks bone-dry beneath our feet. My son, Nathan, and I had just spent a morning hiking through the badlands via the trails of the Nature Conservancy of Canada’s (NCC’s) Nodwell property in Horseshoe Canyon. We’d been coming for years. I was a geologist and knew that somewhere in these rocks, dinosaur bones were hidden. It felt otherworldly to imagine this area used to be lush forests and swamps in the Cretaceous period some 70 million years ago.

Winding through the valley’s many stone-topped hills, we stumbled upon an area where a bunch of bone fragments just laid scattered on the ground. Dinosaur bones? Probably not, we thought. Likely the remnants of a perished mammal. But I had a hunch. Two years later in 2020, we retraced our footsteps to the same spot. We didn’t find any more bones, but I told Nathan that if they were on the ground here, they had likely dropped out from the slope above, due to erosion. Nathan scrambled up the hill and tossed a few rocks down for me to see. But alas, they were just rocks. Then, his tone changed completely.

“Dad, you need to come up here,” he excitedly called down. As I climbed up, I could see him staring at the ground. We could clearly see bones sticking out of the hillside. We found four more bones and snapped pictures for identification. Two days later, François Therrien, a paleontologist at the nearby Royal Tyrrell Museum, known for its archaeological finds of dinosaurs in Alberta’s badlands, confirmed the bones were from the humerus of a young hadrosaur (duck-billed dinosaur). But even more exciting was that because fossil records from that area are super rare (they’re in part of the rock formation devoid of bones), this was a significant discovery.

Dinosaurs and fossils have been Nathan’s fascination since he was six. So, to find a bone bed and be invited to join professionals for excavation is incredibly inspiring for my budding paleontologist. It’s just been an amazing experience. Because of protected places like the NCC’s Nodwell property, we can learn about the natural history of the land and creatures present and past.

Disclaimer: It is illegal to excavate bones in the ground without a permit and authorization. Taking photos only and reporting the location to officials is the best way to conserve your find. The Nodwell property is a conservation area; please stay on the trails where available and be careful when exploring sensitive habitat to prevent disturbing the unique badlands habitat.

This story originally appeared in the spring 2021 issue of the Nature Conservancy of Canada Magazine. To learn more about how you can receive the magazine, click here.