Excerpt: Wild in the city 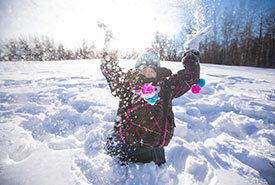 Following a winding trail through a mixed wood of shimmering trembling aspen and white spruce, I arrive at a marsh of willows and sedges guarded by red-winged blackbirds and darting dragonflies. I pause to listen to the birds and watch the dragonflies feed on the wing. On leaving the marsh, the trail mounts a shaded hill leading to a bright, silvery, paper birch forest.

After admiring the height of these old trees, I continue through a grove of feathery tamarack and dark spruce that breaks open into a lush grassy meadow. As I gaze along the far edge of the meadow, an apparition emerges out of the shadows: a white-tailed deer and her fawn. While the pair feeds, a red squirrel behind me breaks the silence with its staccato alarm call, blowing my cover. I turn to see the squirrel vault through the trees. On turning back, I see the deer have disappeared.

Continuing my walk, I think about how unique this place is, not just because of its diversity of wildlife or size, but because it is so close to a large urban centre. The 260-hectare (640-acre) Bunchberry Meadows Conservation Area is located 30 kilometres from downtown Edmonton. Conserved by the Nature  Conservancy of Canada (NCC) in 2016 and officially opened to the public in the fall of 2017, it’s one of the few remaining large tracts of undeveloped land in the area. Its sandy, rolling hills support the aspen parkland that once dominated this landscape, as well as pockets of white spruce, tamarack, jack pine and wetlands.

“What’s remarkable is how these habitats survived for so long so close to a growing city,” says Katelyn Ceh, NCC’s natural area manager for northwestern Alberta. The remarkable story of Bunchberry begins in 1974, when five families purchased the land jointly so they would have a place for their families and friends to spend time in a natural setting not too far from their homes. They made a few trails to allow exploration of the property on foot, but did not develop the property further in their desire to keep the area as wild as possible. As the city approached pieces of undeveloped land like Bunchberry Meadows, the five families felt the looming pressure to sell, but also realized the value of this land in its natural state. Not wishing to sell to developers, they approached NCC. 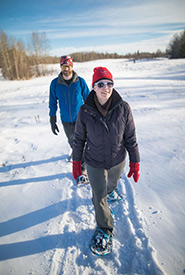 Visitors to Bunchberry Meadows are welcome to hike, cross-country ski, snowshoe and connect with nature, but NCC has also posted a set of guidelines to ensure the natural values of the property remain protected. (Photo by Brent Calver)

Edmonton is one of Canada’s fastest growing cities. In the last six to seven years alone, the city has grown by almost 15 per cent. Should the pace of this population growth continue, it is estimated that the city would need no fewer than 150,000 new housing units in the next decade. Edmonton has sprawled outward in ever-expanding suburban neighbourhoods, into agricultural areas and aspen parklands. Today, more than 80 per cent of Canadians live in large and medium-sized cities. With more Canadians living in cities, access to nature is becoming increasingly critical. In fact, there is growing evidence that time in nature improves our overall physical and mental health. A study by Stanford University found that walking in nature yields measurable mental benefits and may reduce the risk of depression.

There is also increasing recognition about the important services that nature provides to nearby communities and cities. Forests, wetlands and grasslands all play an important role in protecting our water, air and climate. The carbon that is stored in natural habitats is critical for mitigating climate change. These natural habitats also remove air pollution, and provide important services to local communities by filtering and storing water.

To learn more about how you can receive the magazine, click here.