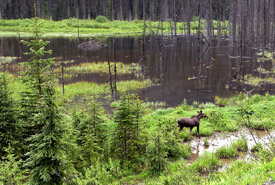 Moose in a wetland, British Columbia (Photo by Thomas Drasdauskis)

Wetlands are unique ecosystems where terrestrial and aquatic habitats meet. They are formed when water is trapped through poor drainage, occasional flooding or coastal barriers, such as sandbars.

The Atlas of Canada defines wetlands as: “lands permanently or temporarily submerged or permeated by water, and characterized by plants adapted to saturated-soil conditions.”

The Hinterland Who’s Who further explains that a wetland is any area of land that is covered with water for a part of the day or year. 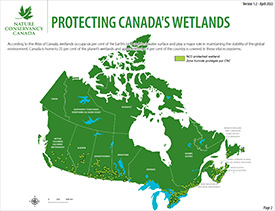 NCC-protected wetlands across Canada (Click on the image to enlarge)

According to the Atlas of Canada, wetlands occupy six per cent of the Earth's land and freshwater surface and play a major role in maintaining the stability of the global environment. Canada has 25 per cent of the planet's wetlands, and approximately 14 per cent of the country is covered in wetlands.

What are the main classes of wetlands?

Wetlands are divided into two classes — freshwater and saltwater.

In Canada, there are many types of wetlands, including: 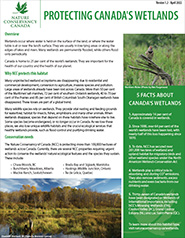 (Click on the image to enlarge this fact sheet)

What are the ecological services of wetlands?

Wetlands serve many functions. They:

In addition, wetlands are one of the most productive habitats in the world, with greater species diversity and nutrient cycling than many other ecosystems, including rainforests and coral reefs.

What lives in wetlands?

Wetlands provide habitat for hundreds of species, including an amazing array of:

What is the conservation status of wetlands?

For many years, the swamps, bogs and marshes that make up wetlands were thought of as wastelands. Many wetlands were drained or filled for agriculture, development and peat extraction. By some estimates, agricultural conversion has accounted for approximately 85 per cent of wetland loss in the last two centuries.

Today, less than two-fifths of Ontario’s original wetlands remain, with losses in some areas as high as 80 per cent.

Now that wetlands are recognized as habitats that support biodiversity and provide key ecosystem services, they are now the only ecosystem designated for conservation by international convention.

The Nature Conservancy of Canada (NCC) has been protecting wetlands since 1968, with the conservation of its first successful project, Ontario's Cavan Swamp and Bog.

In addition to securing wetlands, NCC has been involved in restoring, reclaiming and managing them for the long-term benefit of wildlife and humans.

NCC is also actively involved in the North American Waterfowl Management Plan, an international collaboration between Canada, the U.S. and Mexico to protect wetland and upland habitat for migratory birds and waterfowl. In Canada, partners have worked to protect 9.4 million hectares of wetlands, shoreline, grassland and woodland habitat.