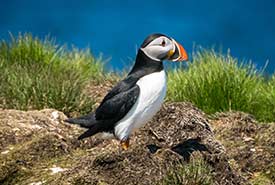 Designated the official bird of Newfoundland and Labrador in 1992, the Atlantic puffin is one of three species of puffin and the only one that lives along the Atlantic Ocean.

The Atlantic puffin’s plumage depends on whether or not it is breeding. In fact, the appearance change is so dramatic that it was once believed it was two different species. This species is most recognizable while in breeding season, sporting its iconic black and white plumage with a black, yellow and orange bill. In winter, when breading season is over, the plumage and bill turns drab with a darker-coloured face, especially around its eyes. In late winter and into spring, the bird becomes temporarily flightless as new feathers on its tail and wings replace the old feathers.

The Atlantic puffin is around 25 centimetres long. Males tend to be slightly larger than females. Its body shape and webbed feet have adapted to diving and swimming underwater. 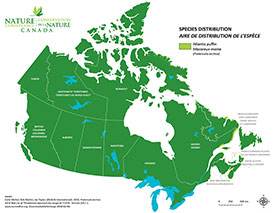 Where does the Atlantic puffin live?

Puffins are found across the northern Atlantic Ocean. They breed on islands and sea cliffs along the coasts of northwestern Europe, Iceland and northeastern North America. They can also be found in scattered colonies in Greenland and the eastern Canadian Arctic.

Atlantic puffins are seabirds and spend most of their lives at sea. They will nest in colonies, and make nests by digging a shallow burrow or hole. Each year, they select the same mate and breeding site. In Canada, nesting usually occurs in April, and the first eggs are laid in May.

What does the Atlantic puffin eat?

Puffins feed on small fish, such as capelin, herring and a small amount of sandlance. Puffins swim along the surface of the water and dive to depths of up to 60 metres to hunt for food. A puffin can hold up to 61 fish in its bill at a time.

What is the Atlantic puffin's conservation status?

Globally, Atlantic puffin are considered a vulnerable species with a decreasing population trend.

Approximately 350,000 to 400,000 puffins currently breed in eastern Canada, mostly in Newfoundland and Labrador. The population suffered substantial declines in the early 1900s due to unregulated egg collecting and hunting on the breeding colonies. Atlantic puffins and their colonies are now protected, but they still face threats from climate change, such as warming the oceans and changes to their food availability.

In 1973, the National Audubon Society started Project Puffin. This program was created to restore puffin populations back in to their historic nesting islands in the Gulf of Maine. Young puffins around 10 to 14 days old were transplanted from Great Island, Newfoundland (where successful nesting had occurred and where around 160,000 pairs nest) to Eastern Egg Rock in Maine. From 1973 to 1986, 954 puffins were moved from Great Island to Eastern Egg Rock. Of these puffins, 914 successfully fledged.