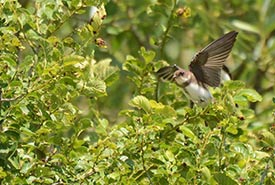 Bank swallows, the smallest swallow in North America, are aerial insectivores. These songbirds feed on flying insects and measure approximately 12 to 14 centimetres in length. The bird is brown on top and white underneath, with a tiny bill and long wings.

Bank swallows are best distinguished by a characteristic dark breast band extending across and down the middle of their chest and their quick, irregular wing-beats.

Where does the bank swallow live? 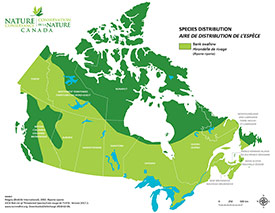 A long-distance migrant, the bank swallow breeds in Canada and the United States, and migrates to Mexico, Central America, the West Indies and South America during winter months. Within Canada, bank swallows have widespread distribution as they breed in all provinces and territories, excluding Nunavut.

Bank swallows are highly social and nest in colonies ranging from 10 nests to several thousand nests. The species burrows into natural and human-made slopes, with a preference for sites with steep banks composed of sand-silt substrates. High, eroding riverbanks, bluffs and sand and gravel pits are used for nesting.

What is the bank swallow's conservation status?

The Committee on the Status of Endangered Wildlife in Canada has assessed the bank swallow as threatened. The Canadian population of this species has shown a long-term decline, with a 98 per cent loss over the past 40 years. It has probably declined due to the many threats throughout its range. These include a loss of breeding and foraging habitat, collisions with vehicles, loss of nesting habitat from erosion control projects, and decline in prey abundance from pesticides.

What is NCC doing to help protect the bank swallow's habitat?

The Nature Conservancy of Canada (NCC) is working to protect the species by conserving their nesting and foraging habitats, including at Missouri Coteau in Saskatchewan, Conway Sandhills in PEI and Minesing Wetlands in Ontario. These areas support a diversity of wildlife and are important for many birds.