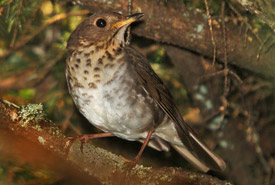 Bicknell’s thrush is one of the rarest songbirds in North America. It is the only bird that breeds exclusively in northeastern North America (eastern Quebec, the Maritimes and New England). This thrush has a unique breeding strategy, with females and males breeding with multiple partners each spring and with up to four males tending to a single nest. This bird prefers cool, wet and windy forests. Its large eyes have been adapted to help it see in dark, dense habitats.

This sparrow-sized bird's lower jaw is yellow with dark spots decorating its chin, breast and sides. At a distance, Bicknell's thrush appears to be olive brown; however, close up, the plumage is warmish brown on its back, with chestnut brown upper tail feathers. 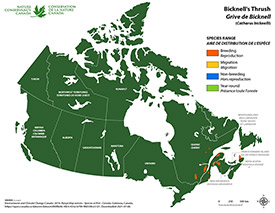 Except for a few offshore islands and coastal sites, Bicknell's thrush occupies the heights of the Appalachian mountain range. In Canada, it primarily breeds in Quebec, in thick coniferous stands from the Sutton Mountains to the Gaspé Peninsula as well as along the north shore of the Gulf of St. Lawrence and Magdalen Islands. In the Atlantic region, it is found in the interior highlands of New Brunswick and Cape Breton Island.

What does the Bicknell's thrush eat?

This bird is often a ground forager, hopping around below its nest trees and feeding on beetles, ants, caterpillars and spiders. The thrush will also act as a flycatcher, eating flies and insects in the branches of trees. In late summer, during migration and on its wintering grounds, Bicknell's thrush adds wild fruit to its diet.

What is the Bicknell's thrush's conservation status?

Bicknell’s thrush is listed as threatened by the Committee on the Status of Endangered Wildlife in Canada and protected under the federal Species At Risk Act. Climate change is one of the biggest threats to these birds as it results in changes in the species composition of trees in their northeastern and high elevation habitats. With the thrush relying on dense conifers for nesting, increasing temperatures are causing a shift to deciduous trees and altering the cool, damp conditions in the understory that the birds prefer. Habitat loss and fragmentation caused by forestry harvesting and infrastructure development are also driving this species’ decline.

What is NCC doing to help protect Bicknell's thrush habitat?

In Quebec, NCC has protected a portion of this at-risk species' nesting grounds on the summits of the Sutton Mountains, part of the Northern Green Mountains Natural Area. Annual population surveys help scientists to better understand the health of this reclusive bird. The species is also a conservation target in other parts of the Appalachians where NCC is active, including the White Mountains and the Gaspe Coastal Habitats Natural Areas.