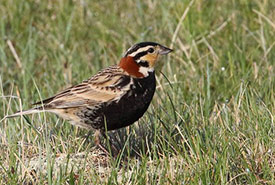 Chestnut-collared longspur is a medium-sized songbird with a stout bill. Like its name suggests, breeding males sport a chestnut-coloured nape, and have a black belly, yellow throat, and a white tail with a black triangle in the centre. Longspur refers to the long claw on its hind toe. Females and non-breeding males are grayish-brown, with streaks on the back and sides.

Where does the chestnut-collared longspur live? 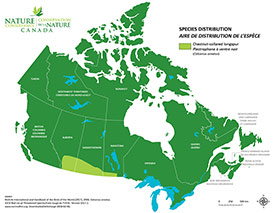 Chestnut-collared longspurs are native grassland specialists that are found in the northern Great Plains. They winter in southern United States and northern Mexico. They nest and feed on the ground and prefer prairie grasslands that have been heavily grazed or recently burned. They will nest in planted grasslands, but typically have lower reproductive success in these areas. For this reason, protecting large, intact areas of native grassland is important for the conservation of this species.

What is the chestnut-collared longspur's conservation status?

The Committee on the Status of Endangered Wildlife in Canada assessed the chestnut-collared longspur as endangered because of its rapidly declining population. Between 1970 and 2017, the Canadian population declined by an estimated 96 per cent. Habitat loss and fragmentation of prairie grasslands on both the breeding and wintering grounds are the major threat to this species.

What is NCC doing to conserve the chestnut-collared longspur's habitat?

The Nature Conservancy of Canada (NCC) has protected nearly 105,000 hectares of grasslands, coast to coast. NCC works with local partners to support ranching activities through community pastures that are managed to protect biodiversity and restore habitats in Alberta, Saskatchewan and Manitoba.

Chestnut-collared longspurs occur on the Fort Ellice project and numerous other projects in the native mixed-grass prairie in Manitoba’s Oaklake Sandhills and Wetlands Natural Area, Assiniboine Delta Natural Area, and West Souris Mixed-grass Prairie Natural Areas. In Saskatchewan, this species occurs in Old Man on His Back Prairie and Heritage Conservation Area, Buffalo Valley, Hole in the Wall and Wideview Complex. In Alberta, it is found on numerous properties around the prairie grasslands conservation region, including Sandstone Ranch.

Fire and grazing play an important role in grassland health. NCC uses prescribed burning and works with ranchers to mimic the natural disturbances in prairie grassland. Maintaining a mosaic of grassland habitats, including patches with short grasses, is important for maintaining species diversity in the prairies, including the chestnut-collared longspur.

Within Alberta, NCC’s main focus in protecting grassland birds is to conserve large, connected patches of land that support a variety or species. Outside of land conservation, NCC is working to improve our use of species-based planning for grazing management to better support a suite of grassland songbirds, and other species at risk that we share the land with.