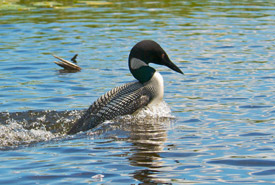 Did you know that the loon is the official bird of the province of Ontario? Considered a symbol of wilderness and solitude, the common loon is known for its haunting voice. It communicates with four distinct calls: tremolo, wail, yodel and hoot. The yodel — a long, rising call with repetitive notes in the middle that can last up to six seconds — is the only one given solely by the male.

The common loon has a black-and-white checkered back, glossy black head, white belly and wing lining with a characteristic white necklace around its throat. Adults weigh from 4-13 lbs and measure nearly a metre from bill tip to outstretched feet. At 75 millimetres in length, the bill is considered quite large and remains black year-round.

Where is the common loon found? 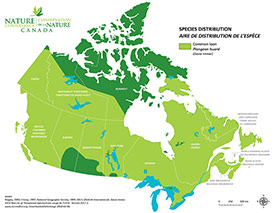 Found throughout most of Canada, loons are often spotted on and around lakes. During the non-breeding season, they may be seen along North America's Pacific and Atlantic coasts, from Alaska to Newfoundland and Mexico.

What does the common loon eat?

What is NCC doing to protect the common loon's habitat?

While the common loon is not an at-risk species, it still faces many threats (such as habitat disturbance) and needs safe places to nest and feed. The Nature Conservancy of Canada (NCC) works to protect natural spaces, such as the Daphne Ogilvie Nature Reserve in BC and Abraham Lake in Nova Scotia, that make it possible for the common loon to thrive.