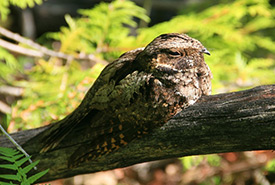 Like most nightjars, eastern whip-poor-will is a nocturnal and well-camouflaged species. It is rarely seen, and often only identified by its distinctive, three-syllabled “WHIP-poor-WEEL” call during the spring and summer.

This species has a distinct “front-heavy” look: their heads are round and relatively large compared to their body, and their chest protrudes out. These are not the only features that make them unique, though; this bird has whisker-like feathers surrounding its tiny, black beak. However, don’t be fooled by the size of its beak, either, because it can expand its gape to consume large prey.

In general, males can be distinguished from females by white patches on the corners of their tail feathers.

Where does the eastern whip-poor-will live?

During breeding season, eastern whip-poor-will can be found in both the United States and Canada. Though the Canadian population covers parts of central Saskatchewan, the southern portions of Manitoba, Ontario and Quebec, and some areas of the Maritimes, most of the population is found in Ontario and Quebec. When the species migrates southward during winter, it can be seen in southern U.S., Mexico and even in Panama.

Eastern whip-poor-will’s camouflaged plumage makes it quite easy for it to nest and brood in leaf litter on the forest floor. It prefers a moderate amount of tree and shrub covering to shade its nest on the forest floor. This explains why many eastern whip-poor-wills can be found in early-successional forests (young forests that contain pioneer species that first colonize disturbed habitats).

What does the eastern whip-poor-will eat?

Eastern whip-poor-will hunts at dawn and dusk, and it also has specific requirements for its foraging grounds. In limited light, the species prefers areas with low tree cover, such as prairies, regenerating forests or wetlands in order to track down prey. If there is a full moon and light is abundant, whip-poor-wills can also hunt all night long, as they have a more thorough view of their prey. Regardless of light abundance, it will usually hunt within 500 metres of its nest.

Despite its small beak, eastern whip-poor-will has a large mouth gape, allowing it to consume moths, scarab beetles and other large, flying insects while hunting in mid-air.

What is the eastern whip-poor-will's conservation status?

Eastern whip-poor-will has been assessed as threatened by the Committee on the Status of Endangered Wildlife in Canada since 2009.

A significant threat to the species is decreasing prey availability due to loss of habitats for insects, declining insect populations, pesticides and climate change. Human factors like agricultural land expansion and deforestation have contributed greatly to the loss of whip-poor-will’s nesting and foraging habitats. Additionally, climate change has created a mismatch between peak insect population and the whip-poor-will’s reproductive season, resulting in less prey being available for adults and chicks.

How is NCC protecting the eastern whip-poor-will's habitat?

The protected forests, fields and meadows of the Nature Conservancy of Canada’s recently acquired properties — such as Port Rowan and Ostrander Point — provide valuable nesting and foraging habitats for eastern whip-poor-will.