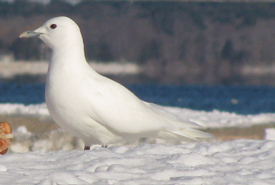 The ivory gull can be identified by its striking pure-white colour and small size, with a body shape similar to a pigeon. Its black legs stand in stark contrast to its light body, and it also has a unique blue bill featuring a yellow or red tip. Younger birds have darker faces with varying degrees of black dotting covering their tails and wings. 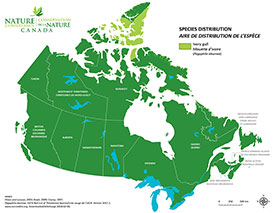 Where does the ivory gull live?

The ivory gull nests in colonies in the high Arctic. Colonies have been documented from the eastern Arctic in Canada, Greenland and the northern islands of Norway and Russia. In Canada, nesting colonies can be found in southeastern Ellesmere Island, eastern Devon Island and the Brodeur Peninsula of northern Baffin Island

In the winter (from October to June), ivory gulls can be spotted on the eastern coast of Newfoundland and Labrador, where they feed in large areas of open water that are surrounded by sea ice, called polynyas. This species has also been spotted further south, but it is often the younger birds that stray further from the Arctic.

What does the ivory gull eat?

The ivory gull mostly feeds on fish and crustaceans in open waters. It will also occasionally feed on eggs and rodents. The gull can also be found scavenging on the corpses of seals or porpoises, and will often trail polar bears in hopes of feeding on their leftover prey.

What is the ivory gull's conservation status?

The ivory gull is endangered. In Canada, the population of the ivory gull declined 80 per cent between 1986 and 2006, and it has an estimated population of only 500 to 700 adults. It is threatened by climate change, resource extraction and toxins that have entered the food chain.

What is NCC doing to protect the ivory gull's habitat?

In 2016, the Nature Conservancy of Canada accepted more than 8,625 square kilometres of offshore exploratory permits from Shell Canada for Lancaster Sound north of Baffin Island. These permits were then released to the Government of Canada, facilitating the establishment of this new marine protected area. This will help protect important winter feeding areas for the ivory gull and a myriad of other species of seabird.