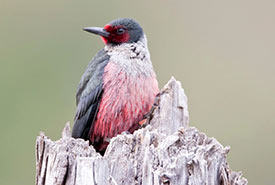 A masterful aerial forager, Lewis’s woodpecker finds food in sky-high fashion. This is not what you would expect from a typical woodpecker, which excavates wood-boring insects from trees. Instead, this species has adapted for fly-catching — perching on tree tops and watching, eagle-eyed, for the right moment to swoop in with laser precision to catch its prey.

The adult Lewis’s woodpecker is a medium-sized woodpecker. It measures 26 to 28 centimetres long, with a wingspan of 49 to 52 centimetres. Its face is dark red and its head, back, wings and tail are iridescent greenish black. A silvery-grey collar sits just above a splash of pink on its chest. Females are a slightly lighter colour in appearance. Juveniles are darker in colour and without red feathers. 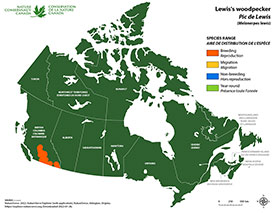 Where is the Lewis's woodpecker found?

Lewis’s woodpeckers are only found in western North America, from south-central BC down to the U.S.-Mexico border. The most common place to find Lewis’s woodpeckers in Canada is in BC’s Okanagan Valley. However, they are also known to breed in mature ponderosa pine forests, from the East Kootenay to central BC. Their habitat in BC represents the northern extent of their summer (breeding) range, to which they return each May.

They are concentrated in open forests, riparian woodlands or grasslands with scattered trees, which are necessary for aerial foraging. Suitable habitats for this species also include mature to old cottonwood stands near grasslands, agricultural fields and recently burned conifer forests. Lewis’s woodpeckers nest in cavities in large-diameter trees that are living, partly decaying or dead.

In winter, birds that nest in Canada migrate to the pine-oak forests, from southern Oregon to northern Baja, California.

What is the Lewis's woodpecker's conservation status?

Lewis’s woodpecker is assessed as threatened by the Committee on the Status of Endangered Wildlife in Canada. It is protected under the Species at Risk Act.

According to the North American Breeding Bird Survey, this species faced a decline of 82 per cent in population between 1966 and 2015. Fewer than 1,000 individuals are found in Canada. There is evidence of ongoing declines.

The greatest threats to the species are habitat degradation and loss. Housing and urban development, agricultural development, removal of dead trees for firewood and, in some regions, mountain pine beetle outbreaks, also contribute to the loss. As Douglas-fir trees fill in the open spaces in ponderosa pine forests, which happens as a result of suppressing the natural forest fires that historically knocked back the encroaching Douglas-firs, the preferred open habitat of Lewis's woodpeckers is lost.

What is NCC doing to conserve habitat for Lewis's woodpecker?

The Nature Conservancy of Canada (NCC) is protecting important habitats in BC’s southern interior that support Lewis’s woodpecker. Thunder Hill Ranch and Marion Creek Benchlands, in the Upper Columbia Valley, contain Douglas-fir/ponderosa pine forests and open woodlands, which are favoured by this woodpecker species. In the East Kootenay, Pine Butte Ranch and Luke Creek Wildlife Corridor are excellent examples of working grasslands that contain wetlands and small lakes. These areas provide suitable habitat for Lewis’s woodpecker and for as many as 80 other migratory bird species.

Depending on the age, condition and history of the forested landscape, the cavity-filled mature or standing dead trees that are used by wildlife can be rare in some areas. Between 2007 and 2017, “wildlife trees” were created on several NCC conservation properties in the Kootenays. Native heart-rot decay fungi were injected into the trunks to create standing dead trees that woodpeckers and other wildlife use for nesting and foraging. The overall project goals were to enhance wildlife tree habitat, and to increase their abundance in areas that have high habitat capability for Lewis’s woodpecker and other cavity-dependent wildlife.