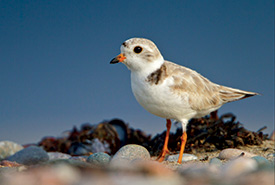 Where does the piping plover live?

When nesting, piping plovers seek out beaches and tidal flats above the high-water mark, with sand, gravel or cobble and little vegetation. In winter, they use coastal beaches, mudflats and sandflats.

Piping plovers are migratory birds. During spring and summer in Canada, they breed along the Atlantic coast, in northwestern Ontario and along the lakes and saline wetlands of Saskatchewan, Alberta and southern Manitoba. In fall, piping plovers migrate south and winter along the coast of the Gulf of Mexico and other southern locations. Over the years, their nesting range has decreased, especially in the Great Lakes area. Many of this species’ nesting and wintering areas are under threat and it is now considered endangered in Canada.

This short and stocky bird is often confused with similar, more abundant plovers such as semipalmated plover and killdeer. Piping plovers have a white breast, abdomen and rump. Their head, wings and back are pale brown to grey, and they have an eye-to-eye black stripe across their forehead and single black band across their chest. Their sandy colour and small size camouflages the bird from its predators.

What is the piping plover's conservation status? 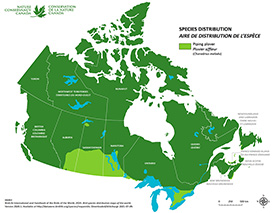 Piping plovers have experienced serious population decline since 1945 and the species is assessed as endangered by the Committee on the Status of Endangered Wildlife in Canada. Some of the threats facing this small shorebird include habitat loss from development and disturbances from recreation and motorized vehicles.

In Saskatchewan, the 2006 International Piping Plover Breeding Census counted 1,435 adults (circumcinctus subspecies) in the prairie regions. Remarkably, 20 per cent of the world population of piping plover migrates to southern Saskatchewan on an annual basis starting in late April, staying until August.

In Nova Scotia, there are fewer than 40 breeding pairs; a decline of more than 25 per cent since 2001.

According to Bird Studies Canada, "in Nova Scotia, piping plovers breed on less than 30 beaches. Many traditional breeding beaches have been lost due to natural and human-induced changes. In fall and winter, plovers are found along the coast of the southeastern U.S. and the Caribbean Islands."

What is NCC doing to protect the piping plover's habitat?

The Nature Conservancy of Canada (NCC) protects 3,692 hectares in Saskatchewan’s Lower-Qu’appelle- Assiniboine-Quill Lakes Natural Area. This includes more than 2,300 hectares of habitat for piping plover. The shallow, saline lakes of NCC’s Shoe Lake West property, within the Missouri Coteau Natural Area, dry out in the summer and provide the perfect environment for piping  plovers. NCC also protects habitat for this species in New Brunswick and Nova Scotia.