A dazzling flash of gold darts about in the understory of swampy woodlands. The “zweet zweet” calls can be heard echoing through the trees. The prothonotary warbler is named for its bright plumage, which resembles the yellow robes worn by prothonotaries of the Roman Catholic church.

The male and female of this species are similar in appearance: they have long, black bills and black eyes, golden heads and breasts that are flanked by blue-grey wings and olive-green backs, with white on the underside of their tails. Prothonotary warbler is a small bird, measuring 14 centimetres in length and, at 14 grams, weighs almost the same as an empty soda pop can. 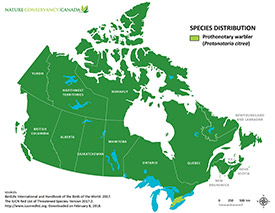 Where does the prothonotary warbler live?

Prothonotary warbler is the only warbler in Canada that nests in small tree cavities. It makes use of cavities that downy woodpeckers or black-capped chickadees have excavated, and will also readily occupy specially designed nest boxes. Males select the nest cavities and begin the nest-building process by bringing moss to the cavity. Once the male attracts a mate, the female finishes the nest-building process using grasses and other plant materials. The tiny nest cup is only two inches wide!

These warblers make their summer homes in mature forests made up of tree species, such as white oak, blackgum, silver maple, willow and yellow birch. All of these can be found in Backus Woods in Ontario — one of the last places in Canada that still supports a small population of breeding prothonotary warblers.

In winter, prothonotary warblers can be found in the mangrove forests of Central America, Dominican Republic, Puerto Rico, Ecuador, Colombia, Venezuela and Guyana.

What is the prothonotary warbler's conservation status?

The global breeding population is estimated to be around 1.6 million, and has declined one per cent per year from 1966 to 2015, according to the North American Breeding Bird Survey. The prothonotary warbler is endangered in Canada according to the Committee on the Status of Endangered Wildlife in Canada and is listed under the Species at Risk Act.

What is NCC doing to protect the prothonotary warbler's habitat?

As the primary threat to the species in Canada is loss of swamp forest habitats, protecting the species’ breeding habitat in Ontario is vital. The Carolinian forests in the Nature Conservancy of Canada’s (NCC’s) Backus Woods property support the birds at the northern limit of their range, in southwestern Ontario. NCC and Bird Studies Canada (BSC) have partnered to create a long-term research agreement to monitor prothonotary warblers and other rare forest birds at Backus Woods.

In the Southern Norfolk Sand Plain Natural Area, NCC has restored almost 800 hectares of former agricultural land, including about 36 hectares of wetland. Over time, some of these restored areas will succeed to forest habitat that will support prothonotary warblers.

NCC uses the information from BSC to inform its conservation goals and actions for the property, which has seen the population rebound 100 per cent since 2002.