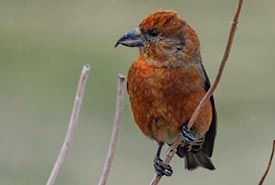 A medium-sized finch, red crossbills are seed specialists and rely on conifer forests for cone seeds as a food source. Red crossbills’ beaks are curved, allowing them to feed on seeds from tightly closed cones inaccessible to other species. An irruptive species (wander beyond their usual range), red crossbills move across the landscape to follow available food sources. This species tends to breed in late summer or fall, when their main food source — cones — is most abundant.

Red crossbills are stocky finches, larger than a warbler but smaller than a red-winged blackbird. Male red crossbills are brick red, with darker wings. Females are olive-brown on the top and yellowish below. Like their name suggests, the tip of their bill crosses when fully closed. The lack of white wing bars distinguishes them from white-winged crossbills.

The percna subspecies is larger overall than other forms of red crossbills. It also has a more massive bill and darker and duskier plumage.

Where does the red crossbill live? 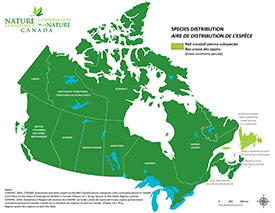 This subspecies of red crossbill can only be found on Newfoundland and Quebec’s Anticosti Island. Areas with red and white pine stands are important habitat for the species. Mature black spruce, balsam fir and white spruce forests also support red crossbills. They have also been observed at bird feeders in Newfoundland.

What is the red crossbill's conservation status?

There are 10 recognized forms of red crossbills in North America. The percna subspecies is assessed as threatened by the Committee on the Status of Endangered Wildlife in Canada. It is estimated that there are fewer than 2,500 adults.

Threats for this species include invasive and non-native species that compete with them for food, such as the introduced red squirrels in Newfoundland, which are direct competition for pine cones. Habitat loss and the reduction of cone crops may also impact this species.

What is NCC doing to conserve the red crossbill's habitat?

Red crossbills have been reported on the Salmonier property in Newfoundland.