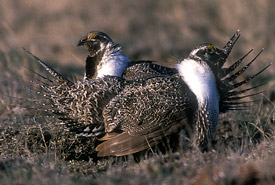 Learn about a bird whose elaborate courtship dance is one of North America’s most incredible wildlife spectacles.

The greater sage-grouse is a round bird with brownish-grey on top and a black, brown and white tail. Adult males have a fluffy white breast with a black throat and belly, along with a long spikey tail. Adult females are lighter in colour than males and have a speckled brown throat and less showy throat and tail. Females also sport a black belly.

Where does the greater sage-grouse live? 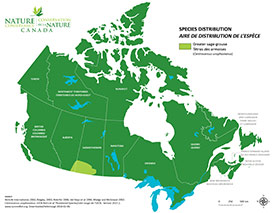 This species is found in western North America in areas where sagebrush grows, including southeastern Alberta and southwestern Saskatchewan. The bird is extirpated (locally extinct) from BC. The Canadian population represents only six per cent of the global population, the remaining 94 per cent being in the U.S.

Each spring, greater sage-grouse congregate in areas called leks. Here, males display elaborate courtship dances for females. As the males strut, they inflate and deflate their throat sacs with a popping sound, throwing their heads back, spreading their wings and fanning out their tails.

Sage-grouse can fly fast but not for long, and only over short distances (a few kilometres). This means most of their movement occurs on foot and typically within a small area. Sage-grouse do not migrate during the winter, but may make small local movements between their nesting and wintering areas.

Female sage-grouse build their nests on the ground either under sagebrush shrubs or sometimes under large tufts of grass. Females are the sole care provider for eggs and the chicks once they hatch.

Although once common across the western prairie, the population of greater sage-grouse decreased by greater than 80 per cent over the past 50 years. Today, fewer than 250 wild greater sage-grouse remain in southeastern Alberta and southwestern Saskatchewan.

Greater sage-grouse are designated as endangered in Canada under the Species at Risk Act, primarily due to native grassland habitat loss, fragmentation and degradation due to oil and gas exploration and the conversion of grassland to cropland.

In 2014, the federal and provincial governments pledged funding to help protect greater sage-grouse, enabling the Calgary Zoo to begin a dedicated conservation breeding and reintroduction program.

In 2016, the zoo announced the creation of Canada’s first-ever greater sage-grouse breeding facility: the Snyder-Wilson Family Greater Sage-Grouse Pavilion. Since then, the zoo has established a healthy population of 54 sage-grouse that makes up the conservation breeding flock.

In fall 2018, the Calgary Zoo released 66 birds at two protected locations. One of the sites, provided by Parks Canada, is in Grasslands National Park in Saskatchewan. The other is on Nature Conservancy of Canada (NCC) conservation lands in southeast Alberta. The zoo continues to release and monitor sage grouse each year.

Barbara Bell was a caring NCC supporter who included a gift to NCC in her Will. It was her wish that this gift contributes to a legacy for conservation while helping an endangered species to recover.

With this gift, NCC invested in a new conservation site surrounded by native grassland in prime greater sage-grouse habitat. This property was named the Bell-Sage-Grouse Legacy Project.

Barbara’s legacy will be carefully managed to support NCC’s role in habitat restoration and the ongoing stewardship of this site and of other vital prairie grassland conservation sites.

The Bell-Sage-Grouse Legacy Project started as an agricultural field that had not been planted for approximately five years. NCC is actively working to restore this 65-hectare parcel of land. This restoration work is a collaborative effort supported by the Alberta Conservation Association and Alberta Environment and Parks. Grassland restoration is difficult and takes time and we expect many years of work ahead.

NCC looks forward to this site becoming an intact parcel of native prairie that provides continuous habitat for greater sage-grouse and other native grassland species.

With this investment, the impact of Barbara’s generous support will be felt across Alberta’s grasslands for generations.

Want to help the greater sage-grouse?