The semipalmated sandpiper is a small shorebird with a short neck, long, black legs and a thin blunt-tipped bill. It is named for the partial webbing between its toes (“palmated” means “webbed”). 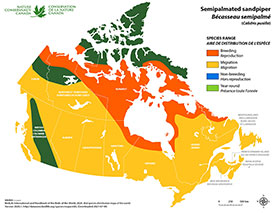 Semipalmated sandpipers breed in the Arctic, from far-eastern Siberia, east across Alaska and northern Canada to Baffin Island and Labrador. They generally nest on open tundra, usually close to water. They winter along the coasts of Central and South America, after migrating a total distance of around 15,000 kilometres. Semipalmated sandpipers migrate along the East Coast and through the prairies.

During their fall migration, they gather in the thousands at stopover points in Atlantic Canada and the eastern United States. Here, they rest and feed before continuing their long migration. It is estimated that eastern semipalmated sandpiper populations may migrate 3,000 to 4,000 kilometres without stopping, from New England and southern Canada to South America.

The International Union for Conservation of Nature has assessed the semipalmated sandpiper as near threatened because of overall population declines. Threats to this species include hunting in South America, habitat loss, chemical pollution and climate change. The Alaskan and western Canadian Arctic semipalmated sandpiper populations are stable. However, the eastern Canadian Arctic population is declining.

The Nature Conservancy of Canada (NCC) owns and protects several properties in Atlantic Canada that are used by semipalmated sandpipers as stopover sites during their migration from the Arctic to South America. These include the Johnson’s Mills Shorebird Reserve, a 227-hectare (562-acre) property on the Bay of Fundy in New Brunswick, the Cascumpec Sandhills and St. Peters Harbour on Prince Edward Island, Mike’s Islands and 11 properties in the Pugwash Estuary totalling 417 hectares (1,030 acres) in Nova Scotia.

During migration, they have also been documented on many NCC properties in the prairies.