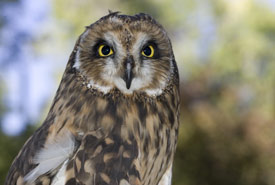 Short-eared owls are medium-sized with distinct black-rimmed yellow eyes and a pale facial disk. Mottled brown with pale chests and thin streaks, they’re identified by the large buff wing patch on their outer wing, which is visible in flight. They have small feather tufts on their heads that look like ears, but they are often not visible. Male and female short-eared owls are similar in appearance; however, females are slightly larger and darker. Their colouration provides excellent camouflage and they are usually noticed only when in flight. 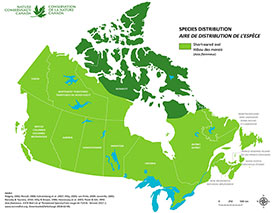 Where is the short-eared owl found?

The short-eared owl is widely distributed on a global scale and lives in habitats such as the Arctic tundra, grasslands, marshes, meadows, prairies and open woodlands. In much of southern Canada, you are most likely to spot this owl during the spring as it migrates north to breed. Between late April and early June, females lay an average of four to seven eggs in ground nests, incubating for roughly 27 days while the male guards the nest and brings the female food. During the breeding season, short-eared owls are most commonly found in the prairie provinces and Arctic.

What does the short-eared owl eat?

Unlike most owls, the short-eared owl is diurnal, hunting mostly at dawn or dusk. It flies over open areas a metre or so above the ground to spot and pounce on its prey. The species' diet consists of small mammals and sometimes birds.

What is the short-eared owl's conservation status?

In Canada, the short-eared owl is assessed as threatened by the Committee on the Status of Wildlife in Canada (COSEWIC). The owl has suffered with a decrease of almost 30 per cent in the last 10 to 12 years. Habitat loss and degradation on its wintering grounds and some breeding sites are a major threat to short-eared owl populations.

What is NCC doing to protect the short-eared owl's habitat?

At the Nature Conservancy of Canada (NCC), we’re working hard to ensure this owl has habitat to thrive on. NCC’s Missouri Coteau in Saskatchewan, Marianne Girling Nature Reserve in Ontario and the Gaspé Peninsula in Quebec are three examples of NCC conservation areas that provide nesting habitat for short-eared owls.