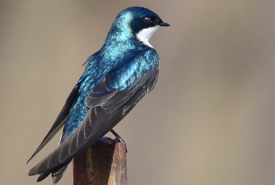 The tree swallow is an eye-catching bird with a shimmering blue back and pure white front. Its flight feathers are black and its face features a narrow, black eye mask. The bird has elongated, pointy wings and a slightly forked tail.

An adult female’s colouration is generally greener and drabber than that of an adult male, and often has more brown in its upper feathers. Juveniles are grey with white fronts until after their first year. 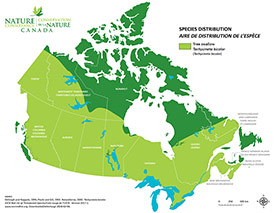 Where is the tree swallow found?

This bird inhabits fields and wetlands, usually near open water. The tree swallow breeds throughout North America and winters in the southern United States, south to Central America. It constructs its nest in tree cavities or human-made nest boxes.

What does the tree swallow eat?

The tree swallow is an aerial forager and captures most of its prey while in flight. It eats a variety of flying insects, with its diet consisting mostly of flies, dragonflies, caddisflies and mayflies. In poor weather, when its regular prey is lacking, it eats plants and seeds. This allows it to winter at higher latitudes than other swallows that rely solely on flying insects for food. During the breeding season, the tree swallow consumes calcium-rich objects, such as fish bones, snails and egg shells, to nourish its developing eggs and nestlings.

The tree swallow tends to feed between dawn and dusk. It pursues its prey while airborne, doing swift aerial acrobatics in the process.

How does the tree swallow behave?

The tree swallow is very social, gathering in huge migratory and wintering flocks. Breeding pairs make their nests near one another. Although the bird pairs up to mate, it frequently mates with extra-pair individuals in secret. A small number of males will even have two mates in different nests.

What is the tree swallow's conservation status?

Globally, the International Union for the Conservation of Nature lists the tree swallow's status as least concern, with the worldwide breeding population estimated to be about 17 million. However, between 1966 and 2014, populations went down by 49 per cent. This decline has been especially steep in eastern Canada and appears to be part of a general decline in the number of aerial insectivores. The exact causes of the decline are unknown, but could be the result of nesting habitat and insect prey loss.

What is NCC doing to protect the tree swallow's habitat?

NCC has acquired and protected several properties across Canada that are inhabited by tree swallows. These include Crabbes River in Newfoundland, Happy Valley Forest in Ontario and Cowichan Garry Oak Preserve in British Columbia.